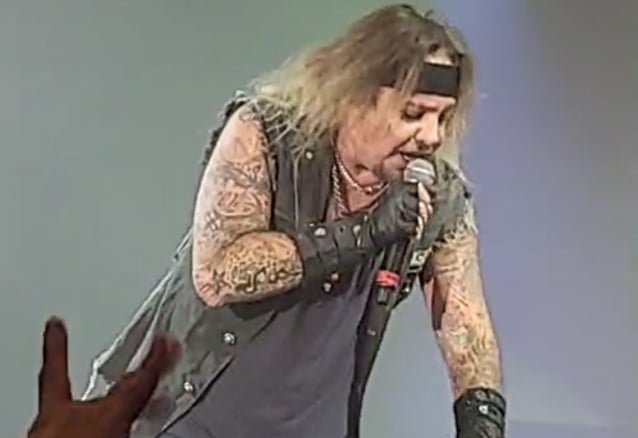 MÖTLEY CRÜE singer Vince Neil suffered a serious injury when he fell off the stage during his solo band’s performance earlier tonight (Friday, October 15) at the Monsters On The Mountain festival at LeConte Center in Pigeon Forge, Tennessee.

According to Metal Sludge, the incident occurred early into the set — while the group was performing “Don’t Go Away Mad (Just Go Away)”, a CRÜE classic which has been a staple of the singer’s solo shows. In fan-filmed video of the episode, which is available below, Vince can be seen encouraging the crowd to clap at the end of the song while taking a step or two forward toward the front left side of the stage before losing his footing and falling off.

According to TMZ, it “turns out there was a small gap between the speaker and the stage that Vince didn’t see and he fell through the crevice onto the floor…. His roadie and a security guy helped him get to his feet, and Vince limped away.”

A short time later, bassist Dana Strum addressed the crowd about the extent of Neil‘s injuries, saying: “The truth is Vince fell and broke ribs when he fell. He can’t breathe and he’s gonna get dealt with medically. Now, that sucks for us, and him. He was so excited to be here. He lives in Tennessee. But he was willing to stick it out and tough it out when the people back here were telling him ‘Don’t do it.’ Let’s have one good round of applause, please, for this guy.”

According to sources cited by Metal Sludge, Neil was taken away in an ambulance. Monsters On The Mountain event co-host Eddie Trunk later tweeted that Neil is “at hospital now getting care & X Rays.”

Last month, Vince revealed that he was trying out a new toning machine in an apparent effort to get in shape for MÖTLEY CRÜE‘s upcoming “The Stadium Tour”. The singer said he was using Emsculpt Neo, a revolutionary new treatment which supposedly builds muscle and reduces fat using both radio frequency and high-intensity electromagnetic energies.

Four months ago, Neil made headlines when he struggled to complete his solo concert at the Boone Iowa River Valley Festival in Boone. Based on fan-filmed video footage of the May 29 gig posted on YouTube, the 60-year-old rocker, who hadn’t performed in more than a year and a half due to the COVID-19 pandemic, began losing his voice several songs into his set, which consisted exclusively of CRÜE classics and cover songs previously recorded by the band.

MÖTLEY CRÜE‘s “The Stadium Tour” with DEF LEPPARD, POISON and JOAN JETT & THE BLACKHEARTS was originally scheduled to take place last summer but ended up being pushed back to 2021, and then to 2022, due to the coronavirus pandemic.

That explains why I lost track of him in this video. I apparently captured the fall at the end of this clip. Totally agree that he looked great and was singing great. Hope the X-rays are clear and you bounce back quickly @thevinceneil pic.twitter.com/jfWT6c3rVb

So, Vince Neil took the stage tonight and into the third song he fell off the stage and broke his ribs.

Vince Neil has fallen at tonight’s Monsters on the Mountain festival and is being taken to a local area hospital now. pic.twitter.com/ahERWH34jr