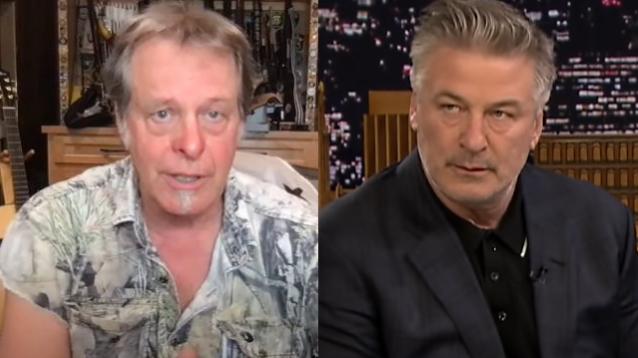 Baldwin shot a prop firearm while rehearsing a scene on the set of the movie “Rust”, killing cinematographer Halyna Hutchins. Hutchins died on Thursday after being airlifted to the University of New Mexico Hospital. Director Joel Souza was also injured in the incident but was released from the hospital the following day.

Nugent discussed the incident during his Facebook Live stream on Monday (October 25). He said (as transcribed by BLABBERMOUTH.NET): “I’m not gonna comment right now on… What’s the dirtbag that shot the guy with a prop gun? Alec Baldwin. We don’t know the details. But until we know the details, all I wanna say is I know Alec Baldwin is just a nasty, nasty man. He would attack the good families of the NRA that did nothing wrong and blame us when there was a school shooting. So we know he’s a liar and his brain is fried and he’s just a prick. But you know what we’re gonna do for the brainfried, nasty, rotten prick? We’re gonna pray for him until we find out the details of that terrible accident — if it was an accident. Because you know if you point the gun at something and you blow that thing up, it’s not an accident; that’s negligence. So as big of a prick as Alec Baldwin is, we’re actually praying for the prick, because I know he’s hurtin’. Nobody wants to kill anybody in an unnecessary moment like that.”

The outpoken conservative rocker and avid hunter, who is the national spokesman for pro-hunting lobbying group Hunter Nation, continued: “When I did the ‘Miami Vice’ episode, I had a prop gun that happened to be the exact replica of the Taurus brushed nickel nine-millimeter that I carried at the time. So when I went to perform on ‘Miami Vice’ back in ’84, ’85, ‘Little Miss Dangerous’ time, I made sure I disassembled my Taurus and separated the spring and the slide and the frame and the barrel, and I separated everything so there was no possibility whatsoever that someone would mistake my real brushed nickel nine-millimeter with the prop brushed nickel nine-millimeter. And even when I shot Don Johnson in the shootout, I made sure I wasn’t pointing it at him. I cannot point a gun at anything I’m not willing to destroy. So I can’t wait to find out what happened. But because he’s a liberal prick, and the media is controlled by liberal pricks, and all the so-called justice in America is controlled by liberal pricks — for the most part. Only the guilty need to feel guilty, ’cause there’s some really good judges and good lawyers and good attorney generals out there — I think nine total. But since the so-called court systems of America are basically run by a gang of pricks, they’ll probably cover for the Alec prick. And we’ll probably never find out what happened.”

Baldwin famously impersonated former president Donald Trump during his time in office on “Saturday Night Live”. Those impersonations were a sore point for the former president, who would often take the time to rail against the actor’s performances on Twitter.

Nugent, who recently resigned from the board of the National Rifle Association (NRA) after 26 years, has called Trump “the greatest president in our lifetime.” He also said the billionaire real estate mogul represents “the heart and soul of the best American families out there.”

Leading up to the 2020 presidential election, Nugent teamed up with Donald Trump Jr. on the campaign trail.

Nugent, known as the “Motor City Madman,” moved to Texas from Michigan more than 18 years ago.