This was it. A month, 50 games, and 140 goals after the curtain-raiser in Rome between Turkey and Italy, this was the ultimate stage of the Euros – the final. Coincidentally, Italy represented one half of the story. while hosts England were the other.

Just as he had done against Germany, Gareth Southgate went for a back-three system, although the difference here was that he was not mirroring his opposition, but instead working against a 4-3-3. That decision took less than two minutes to make a lasting impact on the match, as England scored the fastest-ever goal at a Euro final.

After an intense battle, Italy found an equaliser in the second half to take the game beyond the normally allocated 90 minutes. There were no goals in extra time either, so penalties were needed to decide the winner of the European Championship. The shootout was no less dramatic as the pendulum swung both ways, but in the end, Italy emerged victorious.

In this analysis, we will focus on how England managed to catch Italy off guard early on, and how Roberto Mancini’s side clawed their way back into the match.

As aforementioned, England scored the fastest-ever goal at a final of the Euros, and that was largely down to the tactics they went with.

The 3-4-3 system was much more conducive to Kane’s tendency to drop deep because two midfielders as opposed to three (in a 4-3-3 or 4-2-3-1) naturally opens up more space in the middle of the park. This was evident in the build-up to the goal. 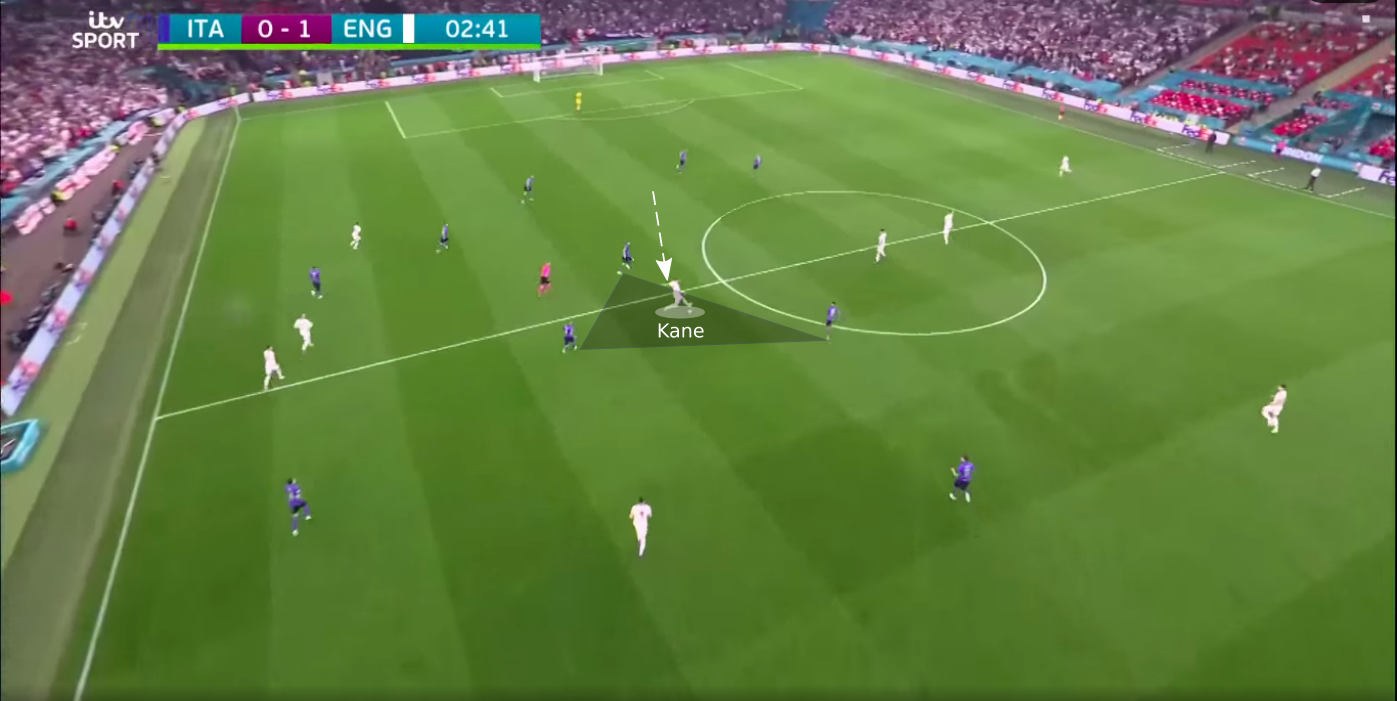 The other advantage was that the three forwards and two wing-backs could overload the Italian back-four. This could be further exaggerated by Kyle Walker making an overlapping run from right centre-back, as is evident below.

All of this overloading freed up Luke Shaw at the back post, who controlled his volleyed finish incredibly well to give England an early lead.

That sort of pass from Kane (after dropping deep into midfield) to Trippier out on the right was a repetitive theme in the opening stages of the match, and it created a couple of other good chances for the hosts too. 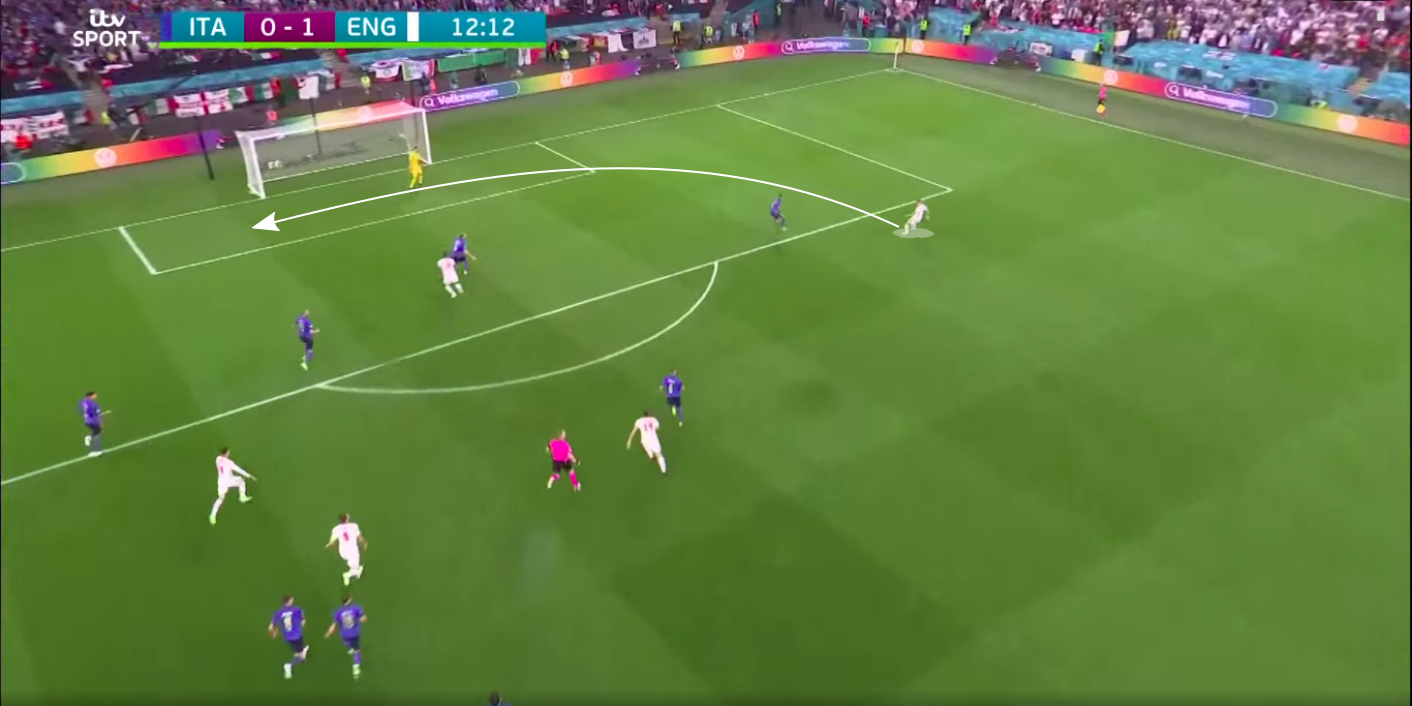 Truthfully, England did not tactically outclass Italy early on, but they simply caught them unaware with a surprise system which the Azzurri clearly were not expecting, even though the teamsheet, which came out well over an hour before the match, was a big giveaway.

Both of the previously examined situations came after attacking transitions from England (as can be discerned from their disarrayed midfield in both cases), but England simply stopped sending men forward in this manner after this stage in order to avoid any risks to their defence. This was perhaps overly cautious, as it allowed Italy to gain control of proceedings by maintaining over two-thirds of possession after the 15th minute.

In defence, England could not really press due to their numerical disadvantage in the front line against a back-four, so they were happy to drop back. Their primary objective was to prevent the Italian midfielders from progressing the ball centrally, which is why the attackers did not man-mark the opposing full-backs. 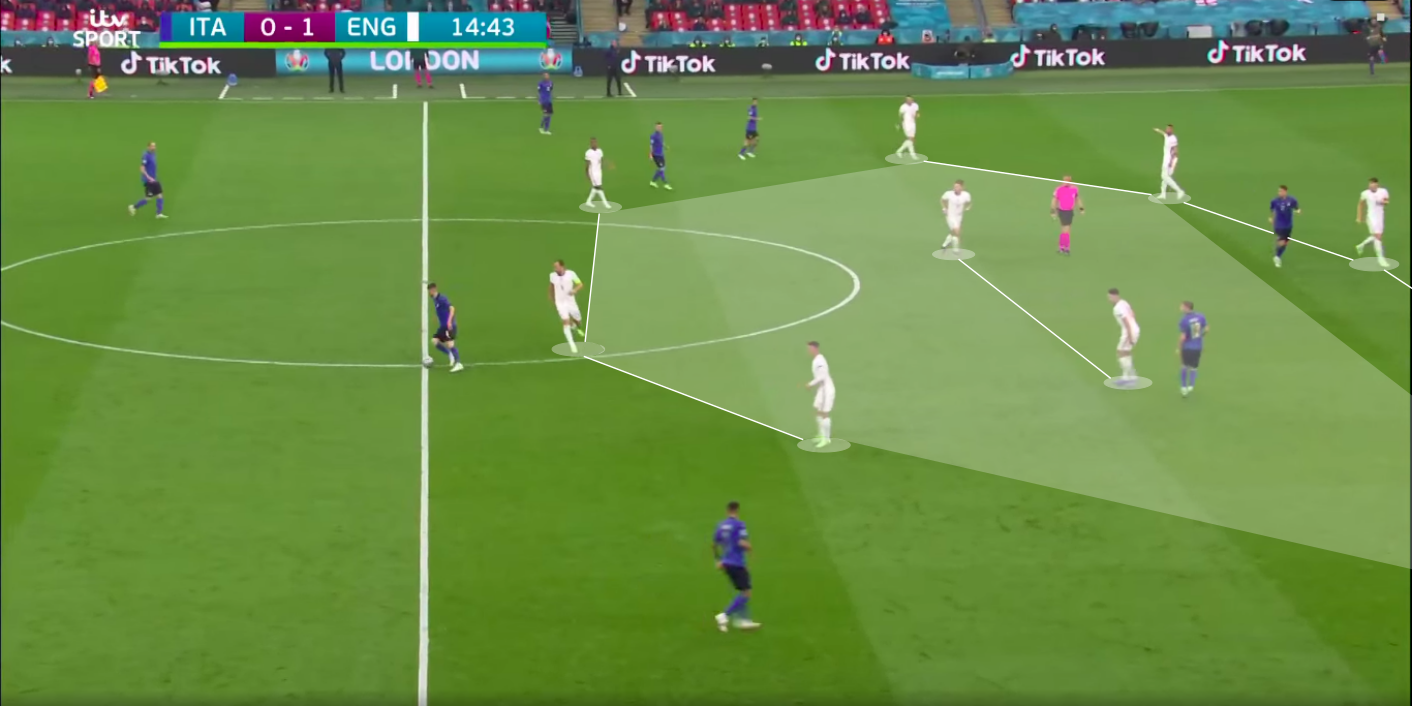 The obvious weakness of this shape was in the wings, but Italy failed to exploit it for two simple reasons. First of all, on the right, their build-up system involved Giovanni Di Lorenzo staying back and aiding the centre-backs, so it was tough for him to overlap in the attacking phase.

The left flank, therefore, has typically been Italy’s main route to the attacking third in this tournament, but with Leonardo Spinazzola out due to an Achilles tendon injury, things got a bit tricky. Emerson, though a left-footed left-back, simply failed to hold enough width on that side and persisted with underlapping runs, which were not too useful against a back-five with a narrow defensive shape.

After Ciro Immobile was replaced by Domenico Berardi in the 55th minute, Italy sent Lorenzo Insigne into the central attacking role, which made their possession play a lot more fluent as Immobile was being rather… Immobile, while Insigne looked happy to drop deep. 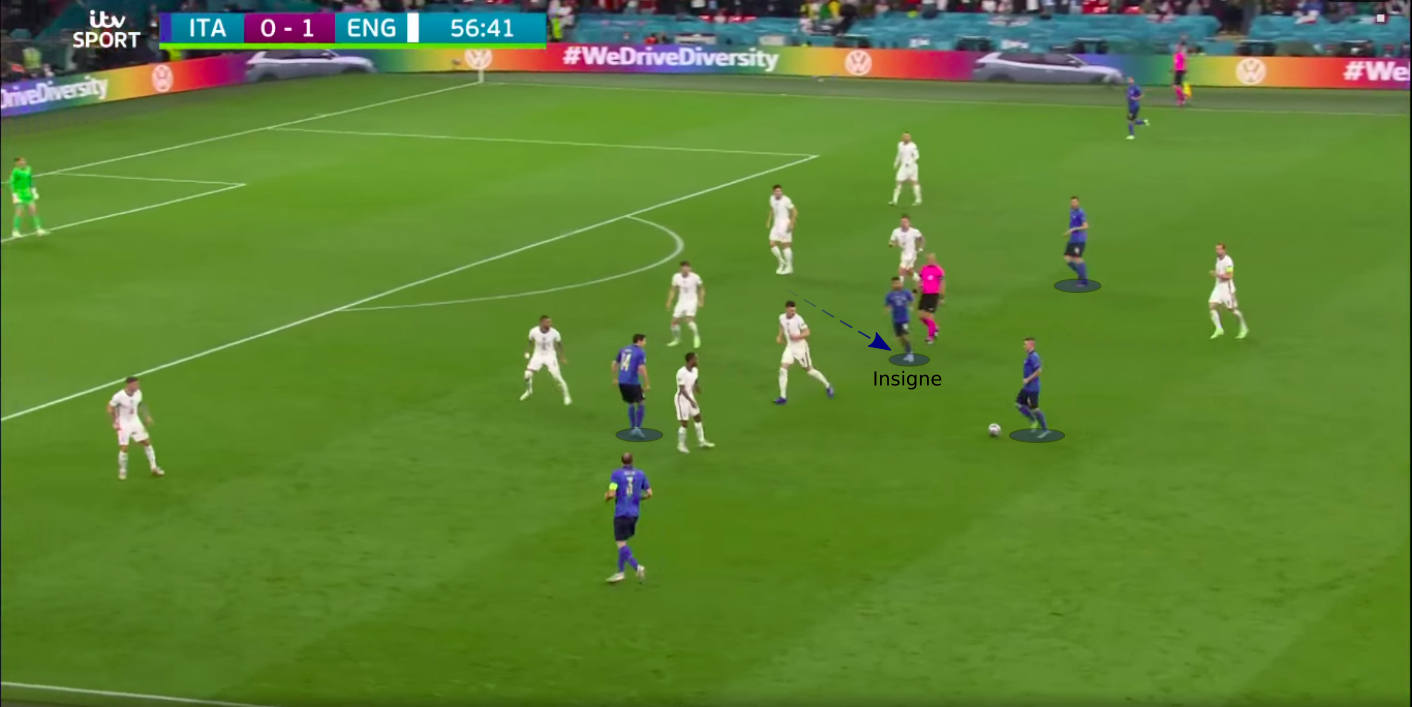 Ultimately, a set-piece proved to be England’s undoing, but you certainly could not say that Italy were underserving given the fact that they had been on the front foot throughout the second half.

With 74 minutes on the clock, Southgate took Trippier off for Bukayo Saka as he switched the formation to a 4-2-3-1. This decision was questionable too, as it took away England’s main attacking weapons – the wing-backs. Even then, they managed to build a little bit of momentum, but then a pitch invader came along to kill it all.

Apart from one sequence of end-to-end action in extra time, both sides failed to get anything going in front of goal, with Italy being crippled because of losing Federico Chiesa – the man who single-handedly dragged their attack along on a couple of occasions – to injury.

Funnily enough, this match was a case of England getting rewarded too early for their tactical decisions. Had they not scored in the second minute, Southgate almost certainly would have encouraged his wing-back to keep getting forward, and this would have in turn forced Italy to find a solution to their problems as opposed to simply letting England hand the impetus to them.

Penalty kicks always are a painful way to decide a final, but there is no better alternative so we must go with them. Italy had the advantage of having gone through these emotions just a few days back against Spain, while England’s mostly young squad were in the first-ever shootout for their country.

The pressure mounted on penalty-substitutions Marcus Rashford and Jadon Sancho did not seem to help, and while one cannot commend a 19-year-old enough for stepping up to take his first career senior penalty in the fifth round of the shootout, questions must be asked of his more senior teammates for letting him step into that situation.

So, a month after the opener in Italy, it did eventually come to Rome.