John Dolmayan says that he tries to “present an opposing viewpoint” for SYSTEM OF A DOWN fans “who aren’t necessarily ideologically in line” with the views of the band’s lead singer, Serj Tankian.

The drummer, who has praised Donald Trump in recent months and has accused Democrats of “demonizing” the president and “blaming him for everything under the sun,” made the comment on Tuesday (September 15) after first sharing a popular libertarian meme with the text: “Did you know? That it’s entirely possible to disagree with BOTH liberals and conservatives? It’s called thinking for yourself and we highly recommend it.”

A short time later, one of Dolmayan‘s Instagram followers asked the musician: “Then why do you seem to only share right wing talking points? If you were truly a free thinker, you’d be offering more than one perspective on the issues you post about, but you only ever post the right wing perspective. Just an observation”

Dolmayan responded: “that’s generally true . Serj has the left leaning perspective on most issues so I present an opposing viewpoint for system fans who aren’t necessarily ideologically in line with Serjs views. So people know there’s different mindsets”.

This past June, Dolmayan blasted “cowards” who criticize those who think they are “coming from a morally superior position,” saying that they “can’t handle free speech” and “need to be herded along with the rest of the sheep.”

He also called Democrats “the true bigots” who “fought to maintain slavery” and were “directly responsible for 70 plus million abortions, a large majority of whom were black.”

Dolmayan supports Trump‘s claim that his administration has done more for the African-American community “than any president since Abraham Lincoln.”

John‘s views are in sharp contrast to those of Tankian, who has called for Trump to resign and described him as “completely useless” over his handling of the coronavirus outbreak. 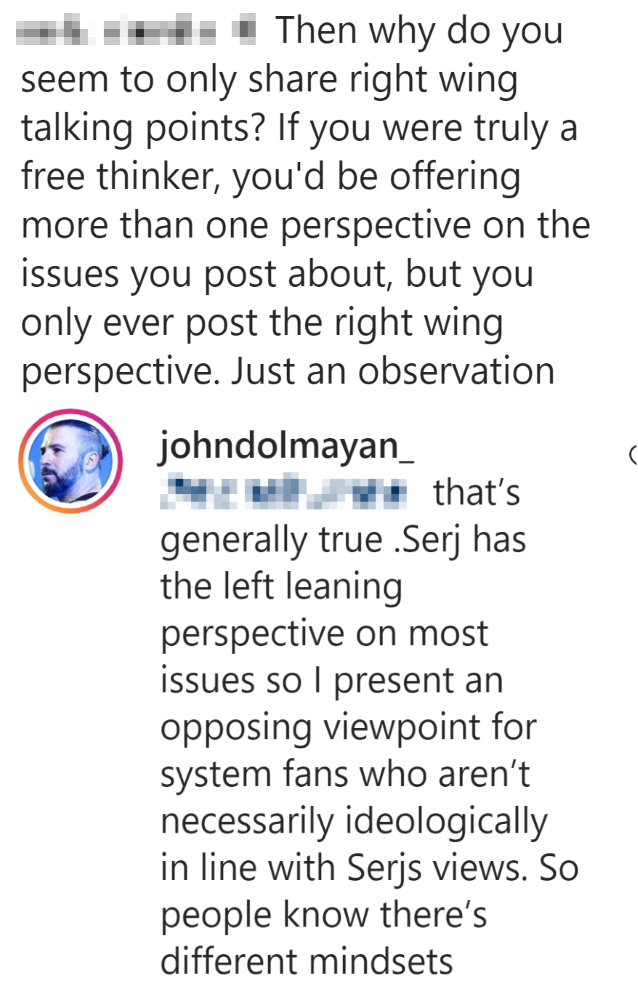