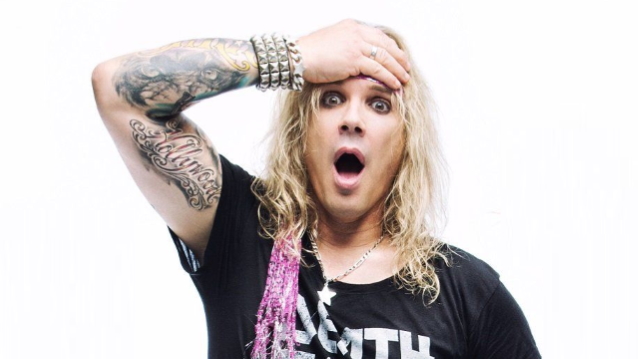 STEEL PANTHER singer Michael Starr has reflected on the passing of Eddie Van Halen, calling him a “complete rock god.” The legendary VAN HALEN axeman died on October 6 at the age of 65 after a long battle with cancer.

Starr, who fronted the VAN HALEN tribute band ATOMIC PUNKS in the 1990s and early 2000s under the stage name David Lee Ralph, told Rock Titan TV (see video below): “You don’t realize how rooted in VAN HALEN one is until one heavy metal hero departs the world, and for me, that’s what it’s been like. I didn’t even know what to post or say or do.

“I didn’t realize how much [Eddie] was a part of my life — inspiration, music-wise. That band was everything for me. And I’m sure it’s the same for a lot of people. I always wanted to David Lee Roth. I always wanted to be Eddie. I can’t play guitar that good, but…

“And thankfully, I got to meet Dave several times, and I also got to meet Eddie a couple of times before he passed away,” Starr continued. “And I’m grateful. I only met him briefly, like, ‘Hey, what’s up?’ I met him at a place called Staples, back before Gary Cherone joined [VAN HALEN]. It was him and [his son] Wolfie in the checkout. I’m, like, ‘Hey, Eddie. I’m a big fan.’ He’s, like, ‘I know your band. ATOMIC PUNKS. You guys are pretty good.’ And I was, like, ‘Holy shit! Eddie Van Halen knows our tribute band.’ That was a huge deal. Then I went to [VAN HALEN‘s] dress rehearsal when they first rejoined with Wolfie at the Forum [in Los Angeles]. And I was walking in front of the stage, and I saw Eddie walk up, and I just walked to the stage and shook his hand and said hi, and that was the end of it.

“So, to me, I look at Eddie as this just complete rock god.

“VAN HALEN was everything for me,” Starr, whose real name is Ralph Saenz, repeated. “I love SCORPIONS. I love MÖTLEY CRÜE, DEEP PURPLE, CHEAP TRICK, RATT, BON JOVI, WHITE LION… I love all that stuff, but to me, it all started with VAN HALEN. Everyone tried to copy Dave and Eddie.”

Eddie died at St. John’s Hospital in Santa Monica, California. His wife, Janie, was by his side, along with his son Wolfgang, and Alex, Eddie‘s brother and VAN HALEN drummer.