Sony’s new Xperia 1 II smartphone is purpose-built for one very specific thing: to make your phone work a little bit more like a standalone Sony Alpha camera. It’s a long time coming: Sony has made dozens of Xperia phones since its first one in 2008, but until now, none of them have had an identity this clear or compelling.

Every smartphone brand tries to create its own ecosystem — or at least its own experience. You surely understand what it’s like to live in Apple’s iPhone world, Google’s Pixel world, or Samsung’s Galaxy world. But there’s long been an entire Sony world that’s just as well-defined, and it has a community of users that’s just as dedicated. It’s just that Sony’s world wasn’t about smartphones; it was about its Alpha line of cameras.

Sony has finally taken the first steps of directly connecting that world to the long-suffering Xperia smartphone lineup. And though the result isn’t a home run, the Xperia 1 II finally offers something to recommend beyond good looks.

It’s a shame that you have to spend $1,200 to live in Sony’s new smartphone world. 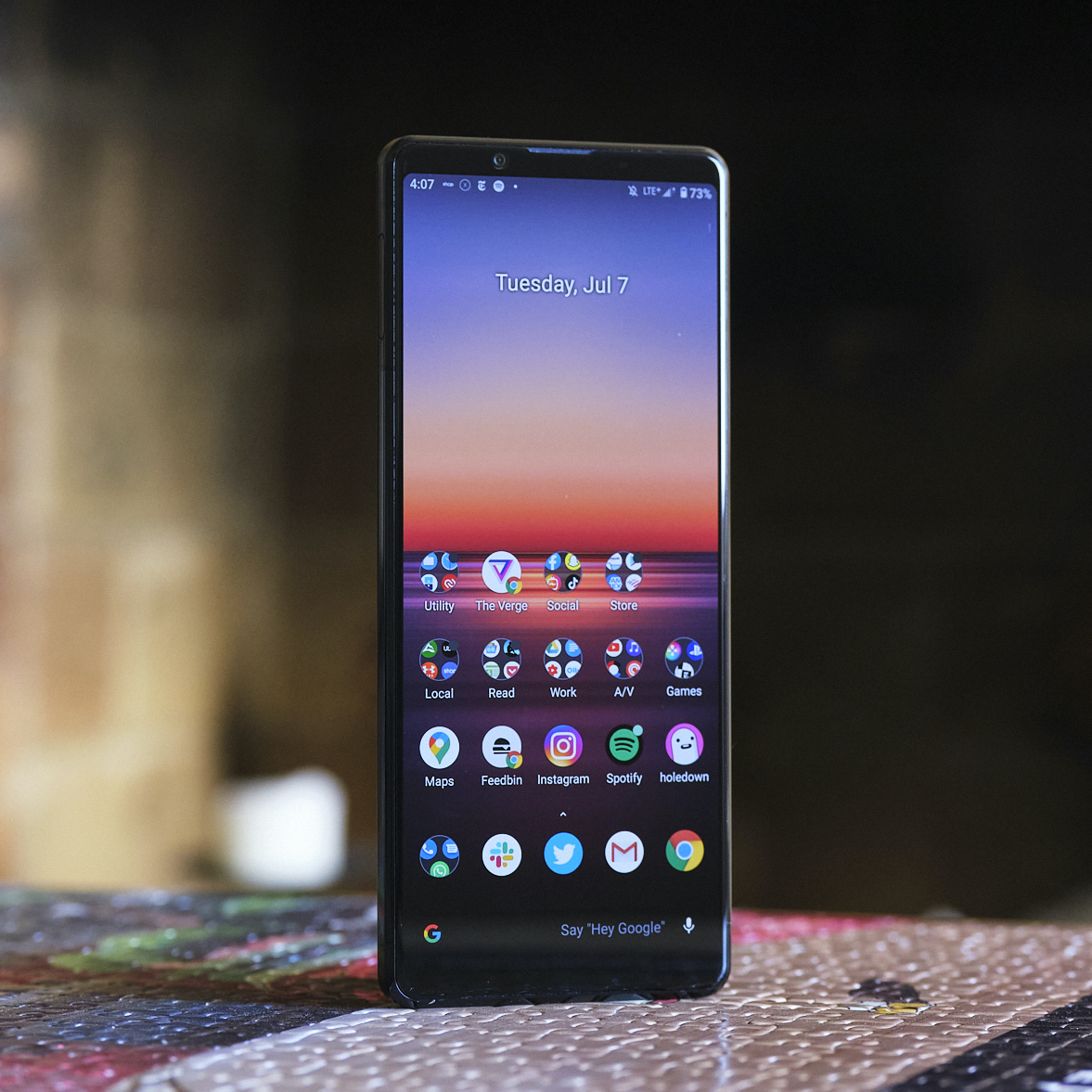 Last year’s Sony Xperia 1 set Sony down the path of a new design language for the Xperia lineup: tall and minimal. The 1 II looks exactly like last year’s phone, only bigger. It’s a squared-off, all-black glass slab with a huge 6.5-inch screen with a 21:9 aspect ratio.

The OLED display measures 3840 x 1644 pixels. (Sony calls this 4K.) It has a standard 60Hz refresh rate, a disappointment on a phone of this class. There’s a “Motion Blur Reduction” option that’s supposed to make it feel more like a 90Hz display, but it doesn’t hold up to true high refresh rate options like the Samsung Galaxy S20 or Pixel 4.

The tall aspect of this phone means that it’s simultaneously more comfortable and more awkward to use. It’s easy to hold in one hand and lets you see more content without scrolling, but give up on any plans to reach the top with that same hand, no matter your grip.

That extra height also means its inductive wireless charger may be placed too high for some charging docks. It only worked on flat docks in my tests. But actually, it doesn’t work there either because the thing is so damn slippery. Even on a dock with some grippy rubber on it, the Xperia 1 II slides right off. In fact, my review unit clattered on to my hardwood floor enough times that it eventually developed a crack on the rear glass. Damned if I know which fall did it, but I do know that all of them were about three feet. Get a case.

That’s a bummer because, judged on looks alone, it’s my favorite phone of 2020. It’s symmetry embodied.

Compared to an iPhone 11 Pro, the Xperia 1 II is very tall.

Beyond aesthetics, Sony has struggled in the past to differentiate itself from other phones. This time, it succeeds with a number of rare features. The fingerprint sensor is elegantly integrated into the side-mounted power button, there’s microSD storage expansion, there are dual front-facing stereo speakers, there’s a dedicated physical camera button, and — holy of holies — there’s a real headphone jack.

To round out the rest of the smartphone basics: it has the usual flagship Qualcomm Snapdragon 865 processor, 8GB of RAM and 256GB of storage, IP65/68 dust and water resistance, and a 4,000mAh battery. The battery life is enough to get me through a day of basic usage. But if you hope to use this phone intensively for either gaming or shooting photos and videos, plan on topping up in the late afternoon.

Normally, this is the part where I tell American buyers that, at $1,200, you’re paying extra for the 5G modem that you may not necessarily get much use out of. That’s true with the Xperia 1 II, only Sony isn’t enabling 5G at all in the US. Asking users to pay more for 5G of dubious utility bothers me on other phones, but asking them to pay for it without any utility on the Xperia 1 II seems so out of touch as to be lost in outer space.

The whole point of the Sony Xperia 1 II is the camera system. Sony has long made the most popular image sensors inside smartphones — it’s a fairly safe bet to say that you have owned a phone with a Sony sensor inside it — and yet, Sony’s Xperia phones have historically had disappointing cameras.

It’s a mystery with a relatively simple explanation: photo processing. For whatever reason, Sony has never been able to keep pace with Apple, Google, Samsung, or even OnePlus when it comes to converting what the sensor gets into a great photo.

Using the default camera app on the Xperia 1 II, that’s still the case. The images I get out of all three lenses — the regular, the telephoto, and the ultrawide — are all competent but feel just a little lifeless. They’re quite good, but compared to other phones in the class, they’re not great. Sony’s camera system doesn’t shine until you take things into manual mode — in an entirely different, preinstalled camera app.

Sony wants you to use its phone camera more like a mirrorless camera, for better or worse

There’s another set of cameras with great sensors that don’t make it dead-simple and automatic to get great photos: standalone DSLRs and mirrorless cameras. They put more of the onus on the user to figure out their settings — but they also give that user radically more control over them.

That’s the direction Sony is taking with the Xperia 1 II. Instead of fighting a losing computational photography battle against other smartphones, Sony is taking the fight back to its home turf: the Alpha camera line.

It starts with a gigantic 1/1.7-inch Exmor RS 12-megapixel sensor set behind a Zeiss lens at a 24mm equivalent focal length. Sony has optimized the entire camera stack for high-speed photography: it can focus at 60fps and burst-shoot at 20fps. It also borrows the much-loved autofocus feature from its Alpha cameras, continuously focusing on a human or even an animal’s eye.

That’s a lot of technical camera talk — which is exactly the point. Where Google and Apple will regale you with stories about how their cameras take multiple frames and then combine them with enhanced HDR computation, Sony wants you to treat your phone like it’s a standalone mirrorless camera.

It sounds silly, but the mere inclusion of a dedicated physical shutter button goes a long way toward making this device feel more like a pro camera.

Sony’s Photo Pro app even goes so far as to imitate the actual user interface of Sony’s Alpha cameras. As a Sony camera user, I love this, but I am also aware that many camera people abhor it (or rather, they abhor the menu system that often lies behind it). In any case, it’s more familiar to me than many of the pro camera apps I’ve tried.

Once you make the leap into Photo Pro, you’ll find that shooting with the Xperia 1 II is enjoyable in the same way that shooting in full manual with a real camera is enjoyable. Sony doesn’t give you direct control over the shutter speed, but you can control everything else (including ISO, a fair enough stand-in since the lens aperture is fixed). The unit I’m testing has non-final software, so strangely, it doesn’t include RAW capabilities. As of now, it’s a weird miss, and we’ll need to see how Sony’s promised implementation works at launch later in July.

The canonical example is capturing motion blur at night. Night mode on other phones won’t allow you to do that because they’re trying to do something else: brighten up the scene so you can see what’s in it more clearly. The Xperia 1 II gives you enough control to get experimental: you can force a low ISO to keep a long shutter speed and not produce an over-brightened image.

The same idea applies to video — for the most part. There’s an app called Cinema Pro that provides a lot of the same video features you’d expect from a standalone camera. It smartly lets you collate a bunch of video clips into a single project as you shoot them. Instead of just dumping everything into your camera roll willy-nilly, it lets you think of your videos as distinct film projects.

The full manual approach only really works on the main 12-megapixel sensor, which is of a higher quality than either the wide or tele sensor. When you stick to it, you can get photos and videos that are really stunning — but you have to work for it. I don’t usually want to work for it when I’m using a smartphone. 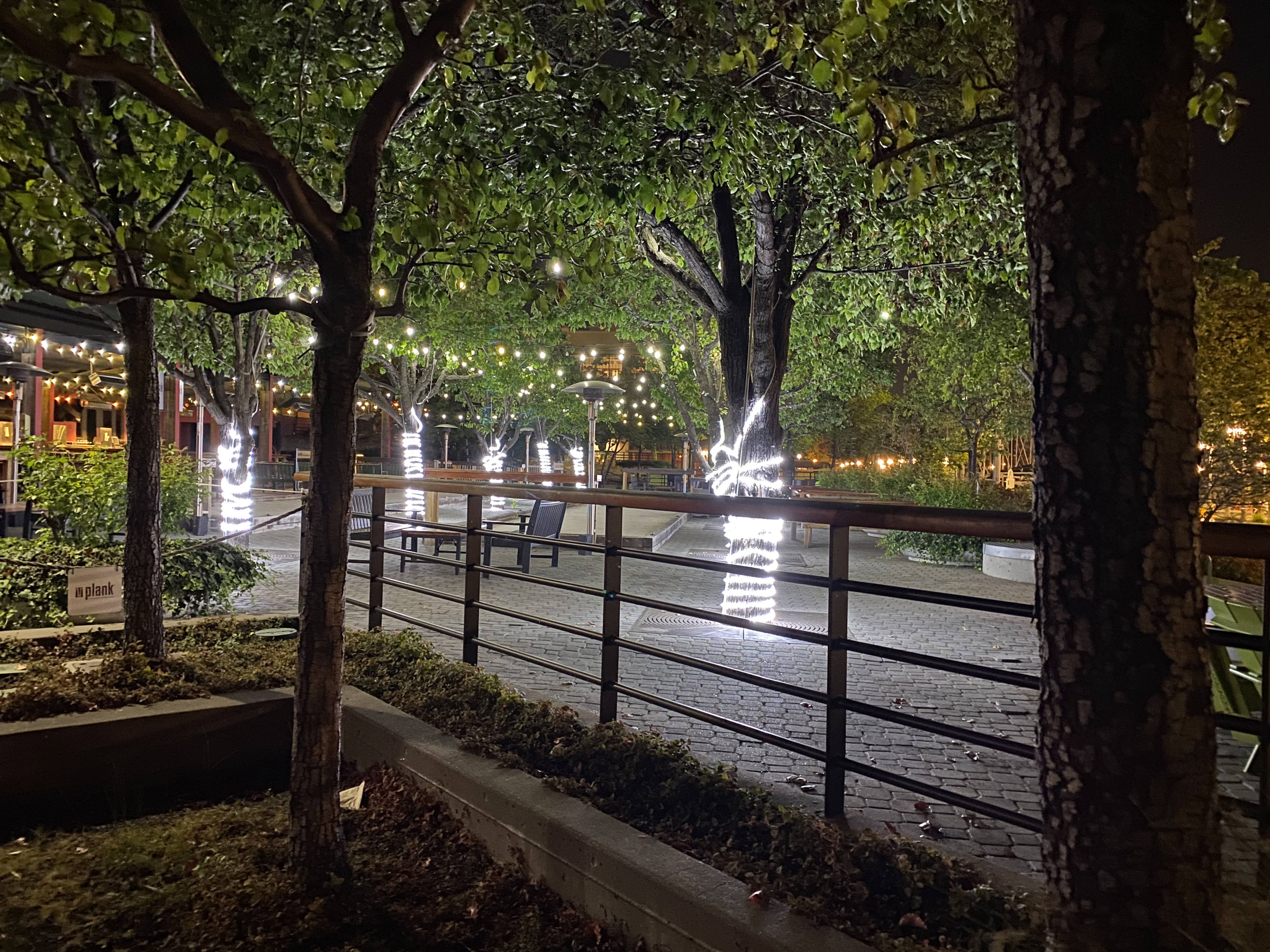 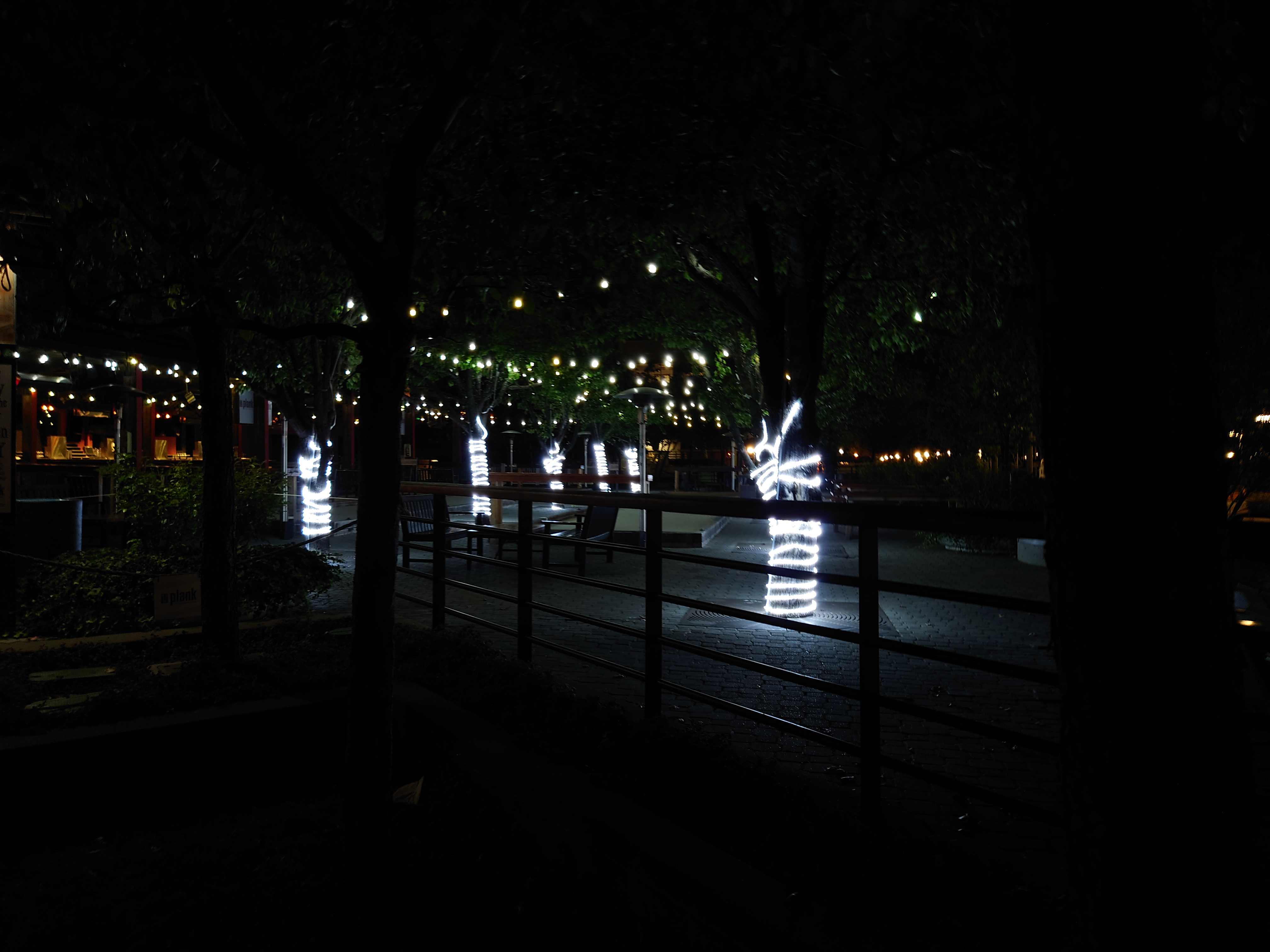 Left: iPhone 11 Pro in night mode. Right: Xperia 1 II in using Photo Pro manual settings. Although the Xperia is worse in full auto in the dark, the manual options give you more artistic control.

What Google figured out first (followed closely by Apple, Samsung, and a few others) is that it’s better to make a great smartphone camera that leans into a smartphone’s strengths than to make a smartphone that tries to replicate the experience of using a DSLR or mirrorless camera. The trend of computational photography isn’t just about compensating for the limitations of tiny sensors and lenses; it’s creating a new kind of camera.

The Xperia 1 II’s camera runs in the opposite direction. I am genuinely interested to see what kind of new instrument Sony could make here, but mostly, I wish the default camera experience was stronger.

Compared to every phone Sony has made before, it has improved so much on the Xperia 1 II that I can’t help but feel a little excited about it. Where once Xperia phones had no differentiating reason for existing, now they’re focused on a new camera experience. Where other Android phones try increasingly arcane tricks to fix their photos, the Xperia 1 II simply puts the control in the hands of the photographer.

Despite all of that, though, I can’t recommend the Xperia 1 II to any but the most devoted Sony world devotee. The high $1,200 price combined with the strange lack of 5G in the US makes it a confusing device at best. Phones that include now-standard flagship features like high refresh rate screens and stronger auto-mode photos can be had for hundreds less. And if you are a Sony camera world citizen, wait to see what the upcoming Xperia Pro can do. (It will have HDMI-in, so you can use it as a proper monitor on a standalone camera.)

With the Xperia 1 II, Sony has finally found the right direction for its smartphones. Now it just needs to move a little further without tripping over its own price tag.