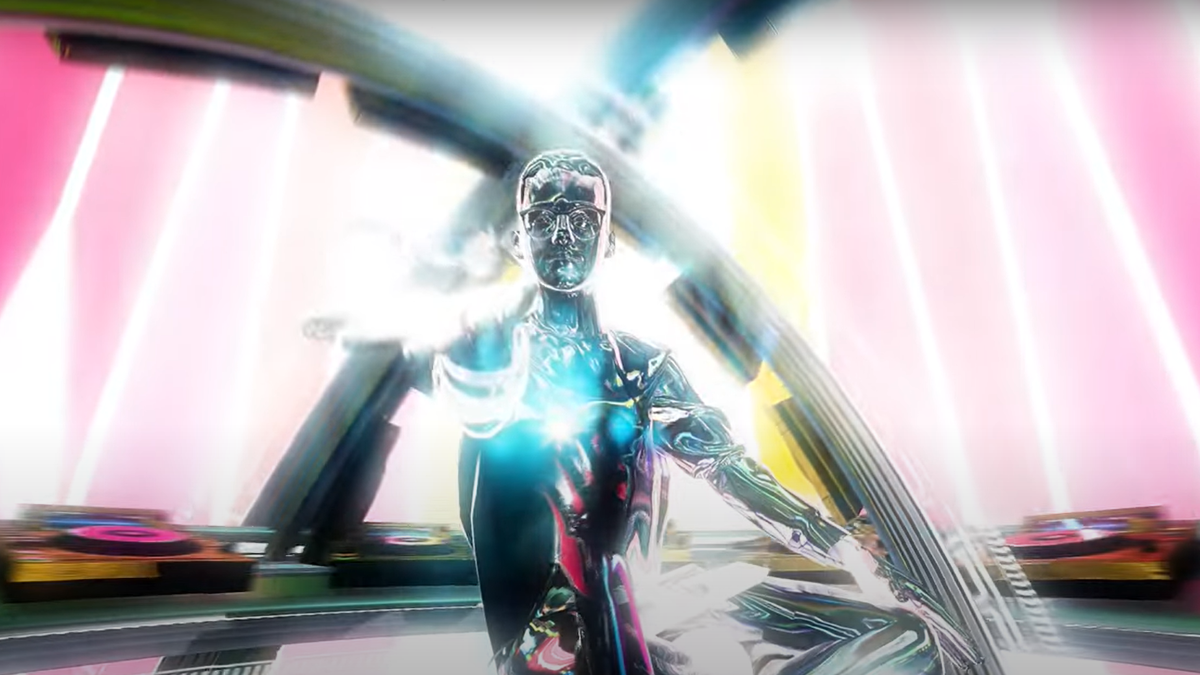 Song of the Week breaks down and talks about the song we just can’t get out of our head each week. Find these songs and more on our Spotify Top Songs playlist. For our favorite new songs from emerging artists, check out our Spotify New Sounds playlist.

It feels significant that British producer Danny L Harle chose to file his latest banger, “On a Mountain”, under his DJ Danny alias. Because, let’s face it: DJs need a win right now. Yes, our favorite spinners have found ways to keep busy behind the scenes over the course of the pandemic. Harle, himself, aside from prepping his upcoming solo album, Harlecore, has remixed no less than Georgia and 100 gecs and produced for 2020 standouts Charli XCX and Rina Sawayama in addition to longtime collaborator Caroline Polachek. That’s damn-good work if you can get it, but in a year where the industry continued to churn out innovative albums and infectious songs with little more than a flinch, what we truly missed out on was being on a crowded floor, drenched in frenzy (hell, it’s sweat), and waiting for that next body-shaking drop.

That’s the desire Harle further feeds with “On a Mountain” and its accompanying video, but like most things these days, there’s a lot more to it than that. Yes, it’s an absolute banger with pulsing synths piled high and trapdoors into absolute cathartic chaos, and the official video even finds us packed on a dancefloor shoulder to shoulder as DJ Danny amps us up before ascending towards the sky with his uplifting hook. But it’s not quite that simple. “I can see your heart’s been broken, too,” Georgia Twinn consoles on repeat throughout the song. “So, just lay here on a mountain, me and you.” Even as outstretched hands from the dancefloor try to follow DJ Danny upwards, Twinn’s there to remind us that there’s all types of healing that needs to happen before we feel whole again. Some of that will take place in sweaty clubs (hopefully in the near future) to songs like “On a Mountain”, but some of the recovery will require us to get used to just being alone or with another person (“me and you”) all over again.

The juxtaposition of a club banger with the acknowledgement that we’re all hurting in different ways (our hearts bruised in countless shades) makes “On a Mountain” that song that might matter just a little more in 2021. It understands both what we yearn for and what we will — whether we know it or not — eventually need.

London post-punks Black Country, New Road flex new muscles on their latest single, “Track X”, demonstrating both restraint and the ability to mine the ether for unusual melodies from unlikely places in this son’s tale that musically waxes nostalgic but lyrically hints at a more complicated past. A staple in the band’s live set, “Track X” will finally find its forever home when the band release their debut album, For the first time, out on Feb. 5th.

Singer-songwriter Julien Baker has her own daunting footsteps to follow in after her 2017 breakthrough album, Turn Out the Lights, and 2018’s EP heard ’round the world as a member of celebrated super group boygenius. Luckily, “Hardline” suggests that Baker will have no problem following her own impressive act. Here, she continues to belt out wounded songs that unpack her mind and heart all while lush backing fills the spaces she might’ve previously left bare. Her evolution as a songwriter should continue before our very ears on Feb. 26th when new album Little Oblivions drops.

After a triumphant 2020, Griselda Records appears to be taking a victory lap in early 2021 with the joint release of the feature-length film Conflicted and its label-studded soundtrack. However, it’s a rare appearance from G-Unit’s Lloyd Banks that earns the top spot on the OST’s highlight reel. Banks drops bars smooth as ever over descending keys and tight percussion, letting fans know that he’s more than content with his life (“How you gon threaten me with relevance/ I left already/ Separated from entertainment/ Now my head is steady”) and secure in his legacy (“Don’t compare me with them without a classic album/ It doesn’t matter how long am missing, they be asking about me”). His flow is so flawless and his message so clear that we can’t be sure if Banks is poised for a comeback or retirement. We hope the former.

The stamp of approval from our 2020 Artist of the Year, Phoebe Bridgers, goes a long way in our eyes, but one listen to “Cuff Your Jeans” makes it clear that Claud’s songwriter vouches for itself. The beat-driven pop song draws the ear with its layered — almost subliminal — choruses and yearning for connection and normalcy in a time when the next step — regardless of age — seems almost too scary to take. Claud’s debut, Super Monster, comes out Feb. 12th.

With a viral single (“I Go Crazy”) and a BTS (Army!!!) songwriting credit under her young belt, Orla Gartland has nothing left to prove to anyone. But now she gets the chance to show us who she’s grown into, and we’re definitely all ears. “More Like You” finds the Dublin singer doing just that, bearing her insecurities and finding greener grass elsewhere over an organically danceable track that mixes creative phrasing with relatable feelings for anyone who’s ever wished they were someone else. It’s the second notable single off a debut that has yet to be named or given a release date.

Check out and subscribe to our Spotify Top Songs playlist.