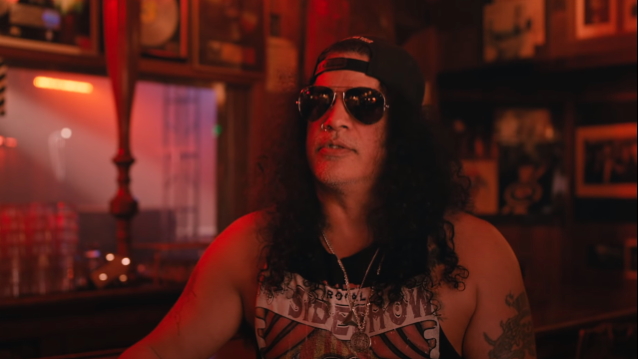 GUNS N’ ROSES guitarist Slash is featured in a new trailer promoting National Independent Venue Association‘s first-ever #SOSFest in partnership with YouTube. The three-day festival, which kicked off on Friday (October 16), includes performances from 35 artists recorded live from more than 25 of the most storied independent concert venues across the United States.

In the three-minute “Folklore” video below, Slash is interviewed at The Troubadour, where he shares his recollections of seeing concerts at the legendary West Hollywood venue and of GUNS N’ ROSES playing there, including the reunited partial classic lineup’s first comeback performance in April 2016.

“Our first GUNS N’ ROSES show proper, that I was involved in, was here at The Troubadour,” Slash said. “We really got our start in this particular venue. I remember we had a show here at some point in 1985, where Tom Zutaut from Geffen came down, and that was who we ended up signing with. This is the gig that he saw us play. I remember that gig pretty well. At that point, we were selling out these venues and had a really big word of mouth going and had a really eclectic demographic coming to see us — from fucking hardcore punk rockers to metalheads and glam and fucking surfers. It was a very mixed up kind of audience, but it was great.

“GUNS came back and played here in 2016, on April Fool’s, the first show back in 20 years, for me anyway,” he continued. “Once we loaded in and started soundchecking, it was like going all the way back to 1984. Playing ‘Welcome To The Jungle’ here all those years later, it was something that… It’s ineffable. It’s hard to really put it into words what that felt like. The funny thing is we had way more gear that this club really holds. So we basically blew the fucking doors off this place. We just thought it would be fitting to get back together all these years later and start at The Troub.”

“Folklore” is a series of short films sharing the unsung stories of America’s independent venues. Venues take center stage as they are celebrated as living legends of culture, tradition, and community. In the spirit of folklore, our storytellers pass down the stories of years spent on stage and back stage in these sacred spaces.