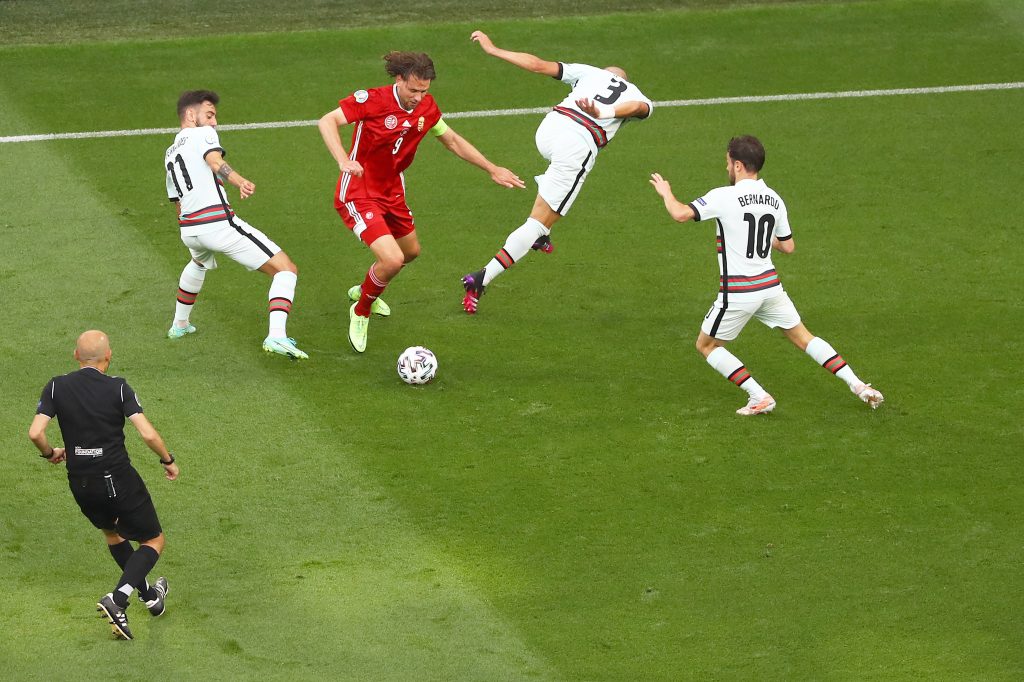 A late flurry from Portugal saw them defeat Hungary 3-0 in their opening group stage game of Euro 2020 on Tuesday.

The holders had numerous chances to take the lead in the first half but were wasteful in front of goal.

Jota’s first chance came five minutes in, striking a shot from the edge of the box that was well saved. If he had got his head up, he could have played in Cristiano Ronaldo to his left.

The former Wolverhampton Wanderers man again had a lovely chance to open the scoring when he found himself free from Bruno Fernandes’ free-kick, but he put his effort way over the crossbar.

Portugal continued to threaten and almost made an opening when Ronaldo slipped in Bernardo Silva.

However, the Manchester City man was stopped from getting a shot away by a perfectly timed Willi Orban tackle.

Jota was again at the heart of things and had another chance on the turn from Nelson Semedo’s cutback, which was saved by Peter Gulacsi.

Another chance went begging for Portugal just before half time, and it fell to the exact man they’d want it to.

Hungary ended the half with just 33% possession and one attempt. Nonetheless, they would have been happy to go in at the break level.

Portugal continued to threaten after half time and almost made the breakthrough immediately when Pepe’s header was kept out by Gulacsi.

Hungary began to make some strikes forward, with Adam Szalai and Attila Szalai both having shots from distance saved by Patricio.

But Portugal were still looking more likely. Gulacsi again had to be at his best, turning Fernandes’ long-range shot wide of the post.

The hosts thought they had made an unlikely breakthrough when substitute Szabolcs Schon’s shot sneaked in at the near post. However, the celebrations were quickly halted by an offside flag.

But Portugal’s pressure finally paid off towards the end, as they took the lead in fortunate circumstances.

Substitute Rafa Silva found Raphael Guerreiro with a cross, and the left-back’s shot trickled into the bottom corner following a significant deflection.

This opened the floodgates, and it wasn’t long before they made it two. Silva again was influential, spinning past Orban before being brought down in the box.

Ronaldo stepped up and was never going to miss. The goal was his tenth in European Championships – the most in history.

And number 11 was just around the corner, as Portugal added some gloss to the scoreline in injury time.

Silva and Ronaldo again combined, and the Juventus forward rounded the goalkeeper to tap in to make it 3-0.

It was a vital win for Portugal, who face Germany and France in their remaining group stage games.

As for Hungary, they will have to pull off an almighty shock to reach the knockout stages.

Peter Gulacsi (7/10) – Made several good saves and could do little about the goals.

Gergo Lovrencsics (6/10) – Did fine at the back but offered virtually nothing going forward.

Endre Botka (6/10) – Coped well with the threat of Ronaldo for most of the game.

Attila Szalai (6/10) – Showed some threat going forward, having one of Hungary’s few attempts.

Attila Fiola (6/10) – Did well up against Bernardo Silva but struggled when Rafa Silva came on.

Laszlo Kleinheisler (6/10) – Worked hard and had some decent touches on the ball.

Adam Nagy (6/10) – Some very neat work on the ball at times. Didn’t produce this consistently enough.

Andras Schafer (5/10) – Struggled to get a grip in midfield. Substituted on 65 minutes.

Adam Szalai (7/10) – Rarely had a chance to score, but his ability to hold the ball up and win fouls was vital.

Roland Sallai (5/10) – Occasionally showed some good footwork but did little to threaten Patricio in goal.

Rui Patricio (6/10) – Rarely tested. Got bailed out by an offside flag for Schon’s disallowed goal.

Nelson Semedo (7/10) – Energetic down the right and contributed a lot going forward. Could have had an assist.

Ruben Dias (6/10) – Up against the physical presence of Szalai, he sometimes looked a bit shaky. Kept a clean sheet nonetheless.

Pepe (7/10) – His usual solid self at the back and came close to scoring the opener.

Raphael Guerreiro (8/10) – Always looking to get forward and got the crucial opening goal.

William Carvalho (7/10) – Strong in midfield and good on the ball, helping his side dominate possession.

Danilo Pereira (7/10) – Much like Carvalho, was essential to his side keeping the ball.

Bernardo Silva (6/10) – Got in some good positions and occasionally looked bright but was denied by some good defending.

Bruno Fernandes (7/10) – Bright on the ball. Had one effort from range well saved and also should have had an assist.

Diogo Jota (5/10) – Often looked the most likely to score, but his decision making let him down.

Cristiano Ronaldo (7/10) – Well below standard for 86 minutes, but took his penalty excellently and capped off the game with a wonderful second.

Rafa Silva (9/10) *MOTM* – Played just 20 minutes and completely changed the game. Directly contributed to all three goals. May have earned himself a place in the starting XI.