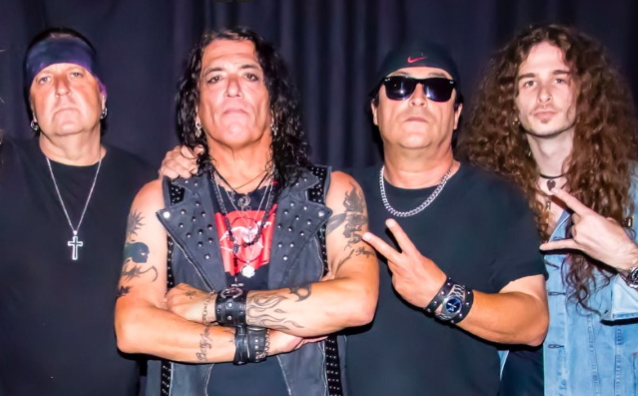 According to Stephen Pearcy, RATT will only play a “handful” of shows this summer. So far, the following dates have been announced, as per the singer’s official web site:

Pearcy and bassist Juan Croucier are the sole remaining original members in RATT‘s current lineup, which made its live debut in July 2018 in Mulvane, Kansas. Joining them in the band are drummer Pete Holmes (BLACK ‘N BLUE, RATT’S JUAN CROUCIER) and guitarist Jordan Ziff (RAZER).

Guitarist Chris Sanders left RATT in early 2020 but has not yet been officially replaced. He joined RATT in 2018 after the departure of original axeman Warren DeMartini. Sanders spent almost two years playing sporadic shows with the band’s most recent lineup before quitting the group, saying in a statement that he was retiring from the music industry.

According to Ziff, RATT was planning to play several gigs early last year as a four-piece following Sanders‘s exit from the group, “but we only did one show where I was the only guitar player in the band,” he said during an appearance on a video podcast hosted by Todd Kerns. “And it was in February. And then that was it. And then COVID [hit].”

RATT — featuring Pearcy, Croucier and DeMartini — played a number of shows in 2017 after reforming a year earlier in the midst of a highly publicized legal battle with drummer Bobby Blotzer over the rights to the RATT name. They were joined at the gigs by ex-QUIET RIOT guitarist Carlos Cavazo, who played on “Infestation”, and drummer Jimmy DeGrasso, who previously played with Y&T, WHITE LION and MEGADETH, among others.

In recent months, Pearcy and Blotzer have mended their differences, as was apparent during the RATT singer’s livestream concert on April 2 from the world-famous Whisky A Go Go on the Sunset Strip where Bobby made a special guest appearance on several songs. Asked in an interview with “The Hook Rocks‪!‬” podcast how the reunion came about, Pearcy said: “I just put it out there, ‘Hey, what’s up?’ We dabble in conversation. And all of us [from the classic RATT lineup] still have business together. It doesn’t matter — it’ll go on forever, just because the band did what it did. There’s always business to do. Like, there’s another best-of [collection] coming out, and everybody has to be… we’re part of it. And if there’s new music on the release, we’re gonna do that. So I just asked him, and he said, ‘Sure.’ And then we talked about a bunch of things. Me and him are just like brothers — fighting brothers. We love to hate each other. But why not? So he said, ‘Yeah.’ And that’s how it came about.”

Pearcy also once again floated the possibility of the surviving members of the classic RATT lineup reuniting to make a new studio album. “Look, anything is possible with us,” he said. “Like I said over and over, we’re not the most dysfunctional band in the world. I hope it happens. I put the feelers out. That’s all I can do. Or release stuff that we have [that] nobody’s heard. And that’s about it. But I will not do another record [unless it’s with the original guys]. It doesn’t make sense. [2010’s] ‘Infestation’ [album] was great, but it didn’t have [bassist] Juan [Croucier]. If we were gonna do it again, which we’ve had offers to do records, I’d say no — unless it’s the original guys, I won’t do it.’

He continued: “The music I write for [my] solo [albums] is music [that is intended] for RATT first. Like the last song I wrote and put out there, that was written for RATT. But I sat on it for a year and I finally said, ‘I’m gonna put it on my solo record.’ And that’s it. A lot of the songs going on the sixth solo record, which I’m gonna go in the studio to start doing, so I can release it this year, [it was] considered for RATT first. And that’s just the way it is. So until we write and do a record, hell will freeze over. We’ll see… All you can do is say, ‘Hey, it could be cool. It would be great if we can pull it all together.’ And just think positive. And if it doesn’t [happen], It’s all right. I’m proud of our legacy. It’s no big deal.”