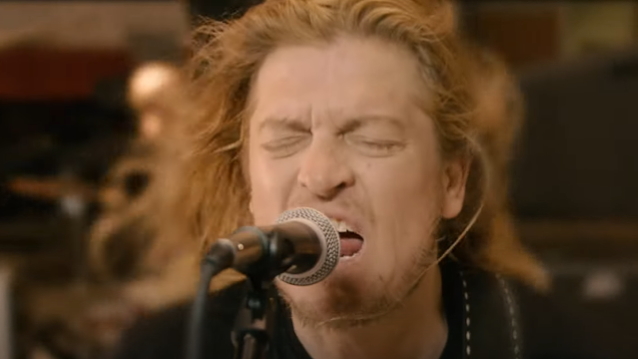 In a recent interview with the Reel Talker web site, PUDDLE OF MUDD frontman Wes Scantlin was asked what “the chicks” are like when you are a “rock star” on the road. He responded: “I’ve just got this to say: when you’re on tour and you’re a singer, we’re constantly trying to rest our voices so we can perform well. And girls, man, they will keep you up, man — they will keep you up too late, too late. And whatever things they’ve got in their pockets, we don’t need that either. So, yeah, the best thing to do is just kind of stick with the wolfpack — just hang with your pack and do not veer away from safety. And just stay focused, stay the course.

“There’s nothing wrong with women, but you’ve gotta stay the course and you’ve gotta be a professional person,” he continued. “Or else you’ll wake up and whatever chicks, they’re keeping you up and you don’t get no sleep and then you suck at singing. And then you’re just, like, ‘Fuck, man. What have I done?’

“Ain’t nothing wrong with the ladies, but they just keep you up a little too long,” Scantlin repeated.

PUDDLE OF MUDD has played a number of U.S. shows in support of the band’s latest album, “Welcome To Galvania”.

“Welcome To Galvania” was released in 2019 via Pavement Entertainment. PUDDLE OF MUDD‘s first album in a decade consisted of ten new tracks and was produced by Cameron Webb (ALKALINE TRIO, DISTURBED, MOTÖRHEAD).

PUDDLE OF MUDD was formed in 1991 in Kansas City by Scantlin, the only original member still with the band.

Wes had almost non-stop problems with the law, alcohol, finances and other issues, before finally getting sober in 2017. He and the rest of PUDDLE OF MUDD rebuilt a touring base, which paved the way to new music and a new album. Scantlin said that he ended up going back to rehab and receiving treatment “because there’s really nowhere else to go.” He also credited his family and fans for giving him the strength to try to get better.

PUDDLE OF MUDD broke into the mainstream with 2001’s “Come Clean”, which yielded three hits — “Control”, “Blurry” and “She Hates Me”.