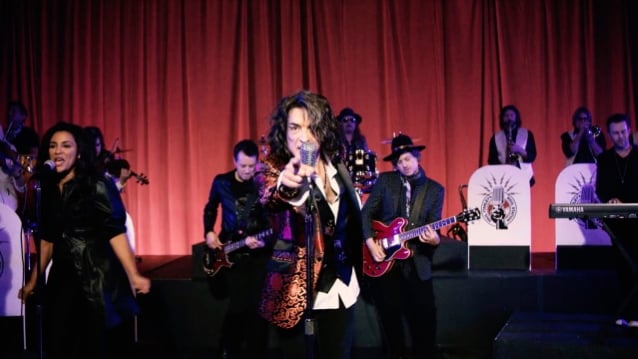 According to The Detroit News, Paul Stanley‘s SOUL STATION will perform via video at this year’s Detroit Music Awards, which will once again be a virtual affair instead of a live event.

The 30th annual celebration of Detroit-area music makers will be streamed on Facebook Live. The ceremony will include additional performances by OUTRAGEOUS CHERRY‘s Matt Smith, ELECTRIC SIX, KEYNOTE SISTERS, Danny Kroha, as well as memorial tributes to THE SUPREMES‘ Mary Wilson and saxophonist Alto Reed.

The debut album from SOUL STATION was released on March 19 via Universal Music Enterprises. A collection of nine classic soul covers and five original tracks, “Now And Then” features the band’s acclaimed version of THE FIVE STAIRSTEPS‘ “O-o-h Child” as well as SOUL STATION‘s take on THE SPINNERS‘ “Could It Be I’m Falling In Love”.

Stanley spent the last few years developing this project close to his heart. SOUL STATION is a band gathering some of today’s leading musicians to pay tribute to the greatest artists and songs from the R&B and soul catalog to keep this vital music current. While a surprise to many, Stanley‘s early pivotal roots in this music has quietly turned this passion into a celebrated touring and recording band. Stanley‘s 15-piece ensemble group has toured the U.S. and Japan.

When Stanley conceived SOUL STATION, the group excelled in the live venue setting, playing smaller, intimate clubs — a setting where Paul Stanley would reflect on those classic hits that were his early inspiration, playing the songs with a reverence and respect for how he and the band believe they should be performed and heard.