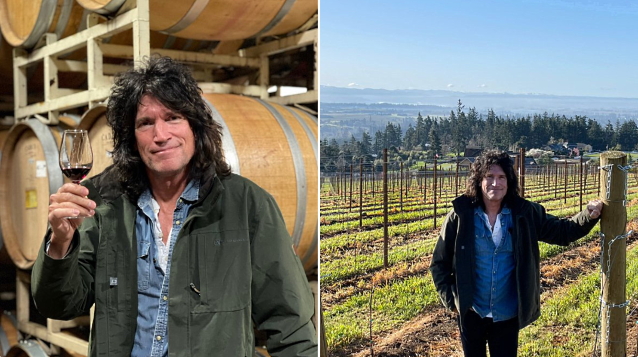 KISS guitarist Tommy Thayer is getting into the wine business.

Thayer received a number of supportive messages on his latest venture, including one from his KISS bandmate Gene Simmons, who shared Tommy‘s tweet and wrote: “Go Tommy!”

Last month, Tommy revealed that he had discovered that he had fathered a child more than three decades ago. He explained during an appearance on the “Hangin’ & Bangin’: Artists On Lockdown” online show: “I found out I have a daughter last summer. I was married for many years and never had any kids, so I kind of thought that window of opportunity had passed me by. But through [DNA-testing company] 23andMe, actually, a second cousin of mine was in contact with Sierra. And she’s 31 years old. So this all took place in ’89, ’89.

“It’s the most incredible thing,” the 60-year-old rocker continued. “It’s just a blessing. And she’s just a beautiful girl — very genuine and just so sweet. It’s just an unbelievable happening in my life. It’s the biggest thing that’s happened to me in a long time, that’s for sure.”

Asked at what point Sierra found out that he was her dad, Tommy said: “Not until we figured this out. I think she was more blown away than I was. ‘Your dad’s Tommy blah blah blah.’ So, it’s really a great story.”

When Tommy first announced he had a daughter, he wrote on social media about Sierra: “We’ve already spent a lot of time since getting to know each other and creating a close bond. She’s a beautiful, sincere person and I couldn’t be happier. I think she feels the same about me.”

He added: “The most wonderful thing about miracles is that they sometimes happen.”

Thayer, who married Amber Peek in 2006, was not previously known to have fathered any children. The couple has since split but reportedly remains on good terms.

KISS launched its farewell trek in January 2019 but was forced to put it on hold last year due to the COVID-19 pandemic.

“End Of The Road” was originally scheduled to conclude on July 17, 2021 in New York City but is now expected to last well into 2022.

I purchased 15 acres of vineyard property in Oregon’s prime wine region last year and plan to produce Pinot Noir, Chardonnay and Sauvignon Blanc wines. Follow along at @VineyardTommy for the latest updates! pic.twitter.com/Qog2zp6iw4