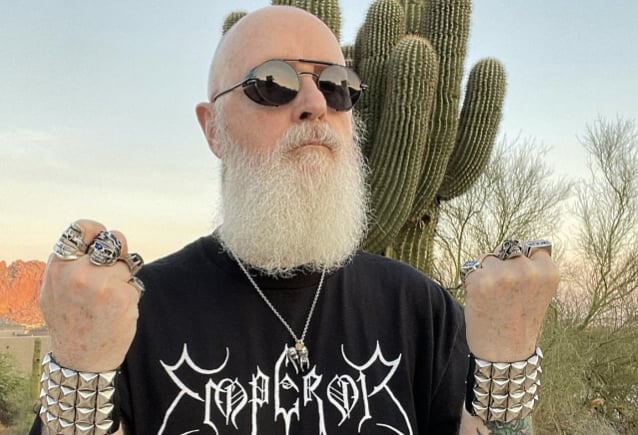 During an appearance on the “All Exce$$” podcast with Danny Zelisko and Tim Richards, JUDAS PRIEST singer Rob Halford discussed the band’s upcoming North American tour, which will mark the British heavy metal legends’ first run of shows since June 2019.

“We kick off in Reading, Pennsylvania in September. So we’ve got some saving grace as far as now and then,” he said, referencing the international travel restrictions to the United States from the U.K. and other countries, including those in the European Union. “I was just talking to Martin, our production guy, about flights back into the U.S., and I’d like to feel that hopefully the corridors between the U.K. and the U.S. are fully open. I think you’ll still have to show proof of vaccination and a test before you get on the plane. But you’ll be able to get off the plane, because that plane is gonna be the safest place in the world to be. Once you get on it, and then you’re safe and then get off and then go back into the world, hopefully you don’t have to go through the hoops and stuff that you have to right now when you get to either end. But, look, I think that you do what you’ve gotta do. You listen to the scientists, not the politicians, and we’ve got through this.”

“Every single one of us has been affected by this pandemic,” he continued. “Every person on the planet, one way or another, has been affected, and we’ve all had to make the necessary safety changes that we need to make.

“Considering the severity of this pandemic, the way that the scientists worked so effectively and so brilliantly to getting a vaccine so quickly, it’s remarkable,” Halford added. “It’s absolutely remarkable the way technology has advanced so much and they do a lot of this stuff on computer — DNA and virus, blah blah blah. It’s just a blessing that this vaccine has been able to be created so quickly.”

Last month, JUDAS PRIEST announced the rescheduled dates for the North American leg of its 50th-anniversary tour. Produced by Live Nation, the “50 Heavy Metal Years” trek will feature SABATON as openers. It will kick off on September 8 in Reading, Pennsylvania and run through October before concluding on November 5 in Hamilton, Ontario.

In early April, JUDAS PRIEST‘s European tour, which was scheduled to kick off in late May, was once again postponed due to “ongoing COVID-19 vaccine issues.” The trek will now run from May 27, 2022 in Moscow, Russia until July 31, 2022 in Oberhausen, Germany.

This fall, JUDAS PRIEST will release a mammoth limited-edition box set which will include every official live and studio album to date plus 13 unreleased discs. This is the most extensive release of previously unreleased music the band has made from its vast archives — a real treat for fans. Restored and mixed by Tom Allom at La Cucina W8 and mastered by Alex Wharton at Abbey Road Studios, this special release will be out on October 15 via Sony Music.