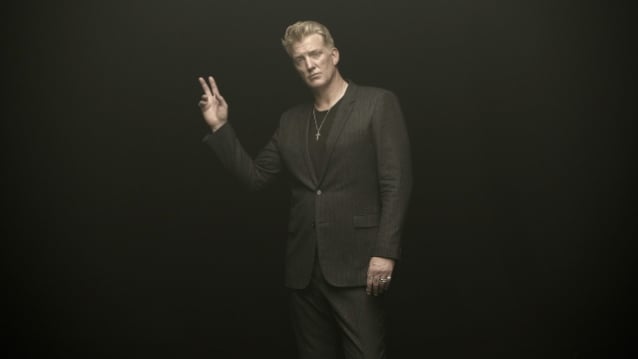 Josh Homme spoke to Kyuss World Radio about the 25th anniversary of KYUSS‘s final album, “…And The Circus Leaves Town”. The Californian four-piece split three months following the LP’s release, resulting in it being less critically and commercially successful when compared to the two KYUSS albums which helped birth the stoner rock movement — 1992’s “Blues For The Red Sun” and 1994’s “Welcome To Sky Valley”.

“I’m not good at keeping memorabilia and I’m not too nostalgic because I guess it makes me feel a little sad sometimes,” Josh said. “And I feel like there’s such a huge pile of things to do. And sometimes I feel like when I look at a picture or something, I go, ‘Man, it’ll never be that. That’s only where it was.’ So I tend to focus forward.

“Hearing that [the album] is 25 years old, that makes me happy. It makes me a little bit proud that I got to do something that long ago, and I’m not dead yet. [Laughs]”

Asked if he had an inkling that “…And The Circus Leaves Town” would turn out to be KYUSS‘s swansong when he chose the LP title, Homme said: “I think the way Brant [Bjork, drums] left [after] ‘Sky Valley’ was a real shock, and it was very much like the rug being pulled out from under you. Because I didn’t really understand [why he was leaving], and he was never able to make it really clear. Because I think it’s difficult, too — when you’re young like that, it’s difficult to say, ‘I need to go this direction.’ When he left, he had our manager tell us that he was leaving, so we didn’t really get to speak to Brant. And one of the things that he had said was, ‘I think the band should be over.’ And I really loved Brant. And I think that was a difficult moment to hear your friend was gone and he wasn’t explaining why and that he thought it should be over.

“One aspect that I always agreed with is that bands, especially at that time, I was adamant that bands shouldn’t go on too long,” he continued. “At the time, I really felt like you do your best work, and when you realize you’ve done your best work, that’s when you should explode the band — to preserve it is to destroy it; that you end [the band] at the absolute apex of your creativity as a group of people. And for me, personally, and I probably should have shared this, but in my gut, I was, like, ‘We’ll do one more record, and it’ll be everything we have.’ And so when I suggested that title, I think I knew that that was it, or I felt that it was coming to a close. It just felt very sort of Edgar Allan Poe, or it felt like ‘Something Wicked This Way Comes’, which is one of the [most] beautiful I’ve ever seen for a book. It’s just got this beautiful ominous darkness to it. And so ‘…And The Circus Leaves Town’ just felt timeless, and it’s over, and you watch the exit on the horizon.”

In March 2012, Homme and ex-KYUSS bassist Scott Reeder filed a federal lawsuit against Bjork and ex-KYUSS singer John Garcia over their involvement in the band KYUSS LIVES!, alleging “trademark infringement and consumer fraud.” Five months later, a judge ruled that Garcia and Bjork could not release any recordings under the name KYUSS LIVES! and warned them that future concerts under the KYUSS LIVES! mark “might continue to subject them to liability for trademark infringement.”

Asked if there is any scenario under which he would consider taking part in a KYUSS reunion of some kind, Homme told Kyuss World Radio: “My philosophy has always been, never do a reunion, never do a sequel. It’s not what it was; it’s what it is. And that’s kind of how I’ve felt. A legacy that involves having been at the epicenter of a scene that got created, it’s so fragile; it’s like an ice sculpture. And I don’t wanna be a blow dryer on that thing. That being said, I was in full support of KYUSS LIVES! and I would go to the shows and I told them as much, until what Brant and, unfortunately, what John tried to do. And that was terrible.”

Elaborating on the breakdown of his relationship with Bjork and Garcia, Homme said: “All you have to do is show each other respect and say, ‘Hey, we wanna do this, and we wanna talk about it.’ Once Scott Reeder told me they were wanting to put out an album, I said, ‘Let’s sit down and talk.’ So Scott and I went and talked to John and Brant. Sorry, it wasn’t Brant — it was just John, because the band as it is, Brant had quit, so he wasn’t part of that, what it was when it stopped, [which was] me and Scott and John. So I said, ‘This is a discussion for me and you and John.’ So I went and talked. And I said, ‘We should find out a way for you guys to continue that’s respectful.’ You don’t trample on what the legacy is and that you kind of let everyone understand what’s going on moving forward. And the name they chose was a little unfortunate, ’cause it’s actually literally saying KYUSS is alive again, which wasn’t my favorite thing, but I was, like, ‘Who cares?’ But unbeknownst to me and Scott during that meeting, they’d already applied for a trademark to steal the name away. So I’m sitting there talking to these guys in good faith, and their managers, and they’d already applied, and you have, like, 20 days to object to the application. So the notion that I’m sitting there talking in good faith about how they could continue, and meanwhile, at that exact moment, in another room somewhere, they’re applying to take the trademark for the name KYUSS so we wouldn’t own it anymore, so John and Brant would own it. And so John had felt like he was robbing himself for something, and that’s just not right — I don’t play that way. And it also meant that they couldn’t be trusted to be honest. ‘Cause I’m sitting in a room, and instead of telling you that, it’s like being stabbed in the back, essentially. There was no choice but to actually take action, because you can’t sit down and say, ‘Let’s talk about this,’ because now you told me that I may say something to you with my right hand, but my left hand might be stabbing you in the back. It’s made it impossible to trust what was going on. And Scott and I both were, like, ‘Jesus.’ And it was only three people — me and John and Scott. It was, like, ‘John, what are you doing? You are allowing you and Brant to take the name from you and me and Scott.'”

Homme continued: “I suppose at the end of the day, they didn’t need a blessing [to play KYUSS music], but I was giving it to ’em. I want those guys to do well. And they were playing KYUSS music for a generation that had only heard of it and never heard it. I didn’t see the harm in that. But trying to usurp it and take it away was just like dirty pool. The problem with all that stuff is that in a lawsuit or something like that, everyone loses; everyone looks bad. People that have loved KYUSS for so long go, ‘Fuck these guys.’ And that’s terrible. That’s why I say it’s so fragile. That’s why I say I’ve always wanted to err on the side of don’t finger bang the ice sculpture; it’s gonna break. If you don’t touch it, it’s just classic. But you don’t punctuate the end of a band with a lawsuit. Those things are tragic, and they’re awful. And then they lost, because, of course, you lose when you do things like that. But that damage is awful.

“But to be honest with you, and to answer your question, there have been times I thought it cannot end that way, and the only real way to end it correctly now would be to play,” he explained. “And because they sort of perverted the punctuation and they knocked the wing off this beautiful dragon that’s an ice sculpture, and the only way to put the motherfucking wing back on would be to [play again].

“I have thought about this, especially in the last few years, to do something special, and even to make up for that mistake of Brant and, unfortunately, John, to make up for it. [I thought we should] play and give all the money away. Like, play for the fans — cover your costs and make it five bucks. Figure out a way to be, like, this is how the punctuation will end the sentence of this band. Because it was never about money — it never was about money. It never was about fame, and when it felt like that was the move they were making, I was so sad.”

After KYUSS split in 1995, Homme went on to form QUEENS OF THE STONE AGE.

In a May 2012 interview with RolllingStone.com, Bjork stated about Homme and Reeder‘s lawsuit, “They don’t want to mention that they trademarked the name KYUSS after I left the band, assuring that I had no rights in KYUSS‘s future. They’re both accusing John and I of doing something that they actually did themselves. Their inner conflict is this: both Josh and Scott want control and money from KYUSS LIVES!, but they don’t want to participate and they ultimately don’t want us to exist. The double standard is unbelievable.”

He added, “Josh and I were the creative force within the band and after the completion of our second record, ‘Blues For The Red Sun’, we developed an opposing view on how the band should exist and operate. In 1992, Josh discovered publishing, which is the financial revenue stream for songwriting. After that, he wanted to write all the songs. As a drummer, I couldn’t make him play my songs. I wasn’t going to compromise my heart and soul and play drums for Josh to make money in a band I started. So I left the band. I was a confused, angry and sad 19-year-old idealist who sacrificed my love of my band for what I believed in. Two and a half years later, Josh would break up the band after John confronted him about the same thing; his need to control the band for personal gain.”