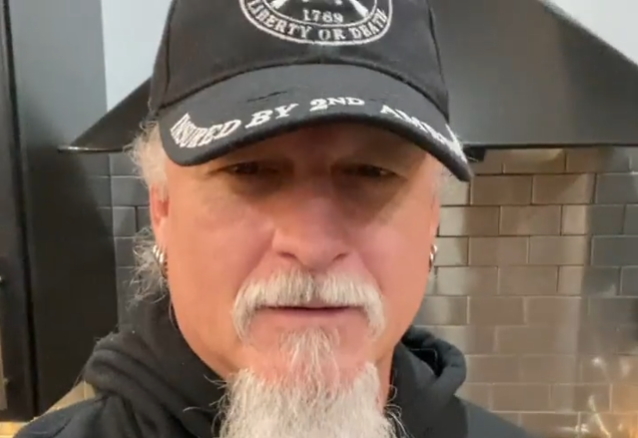 According to WISH TV, ICED EARTH guitarist Jon Schaffer has been taken into custody in connection with the insurrection at the U.S. Capitol.

The musician, who resides in Columbus, Indiana, turned himself in to authorities around 3 p.m. Sunday (January 17), Chris Bavender, public affairs specialist for the FBI Indianapolis Field Office, said.

On January 8, the FBI‘s Washington Field Office released 40 photos of people who were suspected of unlawful entry during a violent insurrection at the U.S. Capitol carried out on January 6 during the final Congressional vote recording for the 2020 general election. Among them was a picture of Schaffer taken by Roberto Schmidt of AFP. In the photo, Schaffer could be seen at the front of a mob, sporting a hat from Oath Keepers, an anti-government militia group, wearing black leather fingerless tactical gloves and pointing his finger while yelling at someone out of the frame.

Schaffer is believed to be one of at least 200 people who are being investigated by FBI officials over their roles in the insurrection. Additionally, the FBI has received roughly 140,000 digital media tips from the public.

One crime that Jon could be charged with is “unlawful entry into restricted buildings or grounds.” If convicted, he would face a maximum penalty of one year in prison, but the sentence would rise to a maximum of 10 years if injuries or weapons were involved. Actual sentences for federal crimes are typically less than the maximum penalties. A federal district court judge would determine any sentence after taking into account the U.S. Sentencing Guidelines and other statutory factors.

Last week, German daily newspaper Die Welt uploaded a video interview it conducted with Schaffer last November at a Washington, D.C. demonstration supporting Trump and protesting the 2020 presidential election results. In the chat, the 52-year-old musician said that “a group of thugs and criminals hijacked this country a long time ago” and warned that “they’re messing with the wrong people here. Because now we see you, and you’re going down. Mark my words.”

Back in 2009, Schaffer raised eyebrows when he launched his SONS OF LIBERTY project via an appearance on a radio show hosted by far-right conspiracy theorist Alex Jones.

More recently, Schaffer voiced his controversial views on the coronavirus crisis during an interview with MetalSucks‘s “The Quarantinecast”, claiming that COVID-19 is “a psychological warfare campaign on the people more than it is a serious pandemic.” Implying that a shadowy cabal of elites is using a global crisis as a cover to profiteer and entrench their power, Schaffer said: “I think there’s a lot more going on than meets the eye here — in fact, I know there is. Legitimate doctors and scientists are being censored and banned on YouTube constantly. It’s unbelievable levels of fraud.”

In a September 2020 Facebook Live chat, Schaffer said that he didn’t trust his government. “I don’t give a shit if it’s an ‘R’ or a ‘D’ next to the name of the person,” he explained. “You can’t put your hope into one president or one person, or a mayor or a governor or whatever. You’ve gotta be out there and actively put pressure on these people, let ’em know you’re paying attention. If you’re not paying attention, they’re gonna rob you and steal everything. Your freedom too. Not just your money. They’re gonna steal your fucking freedom. ‘Cause they’re a bunch of sick control freaks.”