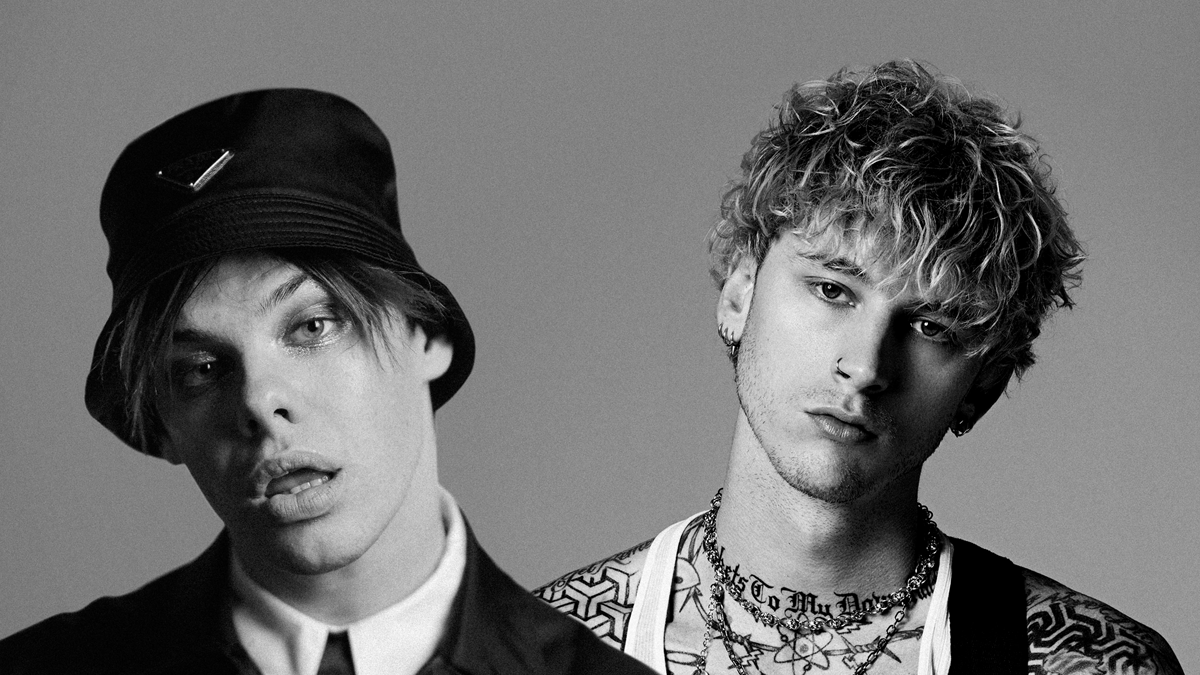 Pop-punk has crept back onto the charts, and its latest takeover is well underway — without any live shows and long after the end of Warped Tour, a hallmark of the genre’s previous reign. In the past year, pop-punk has made its comeback, but with the help of some unlikely forces.

The first of those forces are hip-hop crossovers, which have propelled pop-punk to the top of the charts. 24kGoldn and iann dior’s single, “Mood”, blended elements of pop-punk and hip-hop and went to No. 1. On the Alternative Airplay chart, All Time Low got their first No. 1 with their single “Monsters”, which featured hip-hop star blackbear. A remix featuring Demi Lovato also reached No. 18 on the Top 40.

These weren’t the only pop-punk/hip hop crossovers to top the charts in the past year. Rapper-turned-rocker Machine Gun Kelly always had one foot in the rock scene, playing Warped Tour earlier in his career, but made the decision to lean into that side of his musical background by releasing a pop-punk album last year with the help of Blink-182 drummer and super-producer Travis Barker. Not only did it sound a lot like early 2000s pop-punk, with heavy influence from Blink-182, but it references bands like Jawbreaker, Operation Ivy, and My Chemical Romance. A deluxe track, which samples Fall Out Boy’s “Dance, Dance”, even features The Used’s Bert McCracken. The pivot paid off: Tickets to My Downfall went to No. 1.

MOD SUN, who co-directed Downfalls High, the film for Machine Gun Kelly’s chart-topping album, has also made the switch from hip-hop to pop-punk. MOD SUN, whose real name is Derek Smith, was in the post-hardcore bands Four Letter Lie and Scary Kids Scaring Kids before releasing three solo hip-hop albums. This year, he put out the pop-punk album Internet Killed the Rock Star, which includes features from Avril Lavigne and Machine Gun Kelly.

Rapper Trippie Redd also released a rock album this year, Neon Shark vs Pegasus, produced by — you guessed it — Travis Barker. There’s no denying Barker is a major player in this wave of pop-punk and its overlap with hip-hop. His 2011 solo album, Give the Drummer Some, featured Pharrell Williams, Rick Ross, and Lil Wayne (who later toured with Blink-182). He’s worked on EPs by Yelawolf, 03 Greedo, and nothing,nowhere. He has also featured on songs by Lil Nas X, XXXTentacion, and Ghostemane.

This pop-punk revival has been a long time coming. Fall Out Boy and Paramore have remained popular even after breaks and comebacks (which always helps draw in audiences). My Chemical Romance albums keep re-entering the Billboard charts – despite their last studio album being released over 10 years ago. In some ways, it feels like pop-punk’s influence never quite left pop music.

Pop artists like Halsey and 5 Seconds of Summer not only have hints of pop-punk in their sound, but are friends with the genre’s leading artists like All Time Low and State Champs. Genre-agnostic pop acts like Billie Eilish and Post Malone incorporate pop-punk and hip-hop, among other genres, into their music. Alternative breakout duo Twenty One Pilots, who in many ways are the successors to bands like Fall Out Boy and My Chemical Romance, had a strong hip-hop influence, along with emo and indie.

Pop-punk’s continued relevance is in part due to a long history of hip-hop guest features. Fall Out Boy, in particular, took a lot of cues from hip-hop, collaborating with artists like Wiz Khalifa, Big Sean, Lil Wayne, and Jay-Z across their career. Pete Wentz’s Decaydance label signed rap-rock band Gym Class Heroes, whose frontman, Travie McCoy, reached pop-level fame with his 2010 single “Billionaire” featuring Bruno Mars. Around the same time, Hayley Williams guested on rapper B.O.B.’s hit “Airplanes” and its sequel, which also featured Eminem. Paramore’s “The Only Exception” also made an appearance on pop radio alongside “Airplanes”.

The blurring of these two genres culminated in the advent of emo rap, which set the stage for today’s pop-punk moment. Emo rap, in addition to blending rap with the emo and pop-punk from the mid-2000s, made emo accessible to people who didn’t just look like the emo bands of the past (predominantly male and white) and showed that emo’s mainstream era had an impact on an entire generation of musicians and fans. Artists like the late Juice WRLD, Lil Peep, and XXXTentacion shot up in popularity by drawing from and even sampling pop-punk songs. It revitalized one genre by translating it into another one that has much more relevance: hip-hop.

Pop-punk, is, quite literally, a mix of punk music with pop. In the time since the mid-2000s, hip-hop has become the defining genre of our era, dominating the charts for the past five years. This means that the “pop” in pop-punk now includes hip-hop. It’s hard to think that these artists would have had this success if their style of alt-rock wasn’t mixed together with hip-hop.

But there’s another major factor bringing pop-punk back, and it’s causing a lot of change in the music industry. TikTok has been revitalizing hits from the 2000s and 2010s – many of them scene staples like 3OH!3’s “DONTTRUSTME”, Paramore’s “All I Wanted”, and All Time Low’s “Dear Maria, Count Me In”. It’s also bolstered newer songs, like “I Miss Having Sex but at Least I Don’t Want to Die Anymore” by pop-punk-adjacent band Waterparks, who didn’t even release the track as a single (and have subsequently signed to hip-hop label 300 Entertainment). YUNGBLUD, whose work combines elements of pop and punk with other genres, frequently collaborates with Machine Gun Kelly and Travis Barker, and his song “parents” went viral on TikTok earlier this year.

TikTok has also minted some new stars. Jxdn (Jaden Hossler) was already known primarily as a TikTok influencer before releasing his own music — he also landed on pop-punk as his genre of choice, influenced by emo rap and artists across the spectrum, such as Blink-182 and All Time Low. He’s also had help from Travis Barker, who has signed jxdn to his label DTA records, and produced LILHUDDY’s “The Eulogy of You and Me” along with fellow TikTok star-turned-musician Nessa Barrett’s early Avril-Lavigne-style “la di die,” which also features jxdn.

TikTok is good at two things that are helping bring pop-punk back: nostalgia and promoting subcultures. TikTok’s nostalgia machine has caused hits of the past to go viral among a new generation, from Fleetwood Mac to Arctic Monkeys. Pop-punk has always had a strong diehard fanbase, despite not being a part of mainstream pop culture in the past decade. (In many cases, those fans have proved they’re willing to show up in real life, beyond TikTok; MGK recently played an in-person show to 5,500 people, drawing mixed reactions due to the ongoing pandemic.) On TikTok, users sort their content into subcultures using tags, and TikTok serves that content to a wide audience, allowing them to gain a following and eventually go viral.

It’s the combination of hip-hop and TikTok that are largely responsible for bringing pop-punk into the spotlight again. TikTok is an audio-driven app. Users take sound bites from other posts and use them in their own videos, and users can search for other videos that use that audio. TikTok also enables users to mash up, splice, or add to sound or video clips. It’s sampling and remixing, but in audiovisual form. So, it’s no surprise that it’s become a musical launching pad or that hip-hop and genre-blending music have found a natural home on there.

Hip-hop has long relied on sampling. When hip-hop artists started to sample rock songs, emo rap was born. Emo music and TikTok share a target demographic: teenagers. And today’s teenagers have grown up during a mainstream hip-hop boom. The emo rap songs “Death Bed (Coffee for Your Head)” by Powfu featuring beabadoobee, The Kid LAROI’s “Without You”, and Lil Uzi Vert’s “XO Tour LIF3” are all popular sound tags on the app.

After pop-punk exited the mainstream in the late 2000s, it went through a narrowing, resulting in the mid-2010s iteration sounding rawer and less pop-influenced. That’s changed in the past two years. 2020 albums by Neck Deep, Stand Atlantic, and Boston Manor, whose previous material was very much in keeping with the more back-to-basics style of pop-punk, instead released more experimental albums, incorporating pop, electronic, and even hip-hop influences. Artists like Rivals and DE’WAYNE are continuing this trend.

A new generation of pop-punk bands, like Pinkshift and Meet Me @ The Altar, are gaining traction. And while their sound is more traditional, rawer, more punk than pop, they do represent a different form of progress within the genre: both bands are racially diverse and fronted by women.

Overall, there’s been a big pivot to rock in the pop world, with Miley Cyrus’ rock’n’roll Plastic Hearts and Poppy’s metal-forward I Disagree album. Doja Cat even performed a metal version of “Say So” at the 2020 MTV EMAs. It’s hard to tell what direction this will go in — whether it’ll be just a pop-punk explosion or a full-on rock takeover — and who it will benefit. Historically, bands who made it big in the 2000’s were able to keep up that momentum, but it’s been harder for younger bands to break through.

Right now, the rock fever is mainly boosting pop and hip-hop stars who were already famous before making rock music and might have achieved the same level of success with a pop or rap album. If the pop-punk resurgence continues, it’ll be interesting to see which newer artists rise up during this era and after it as well.