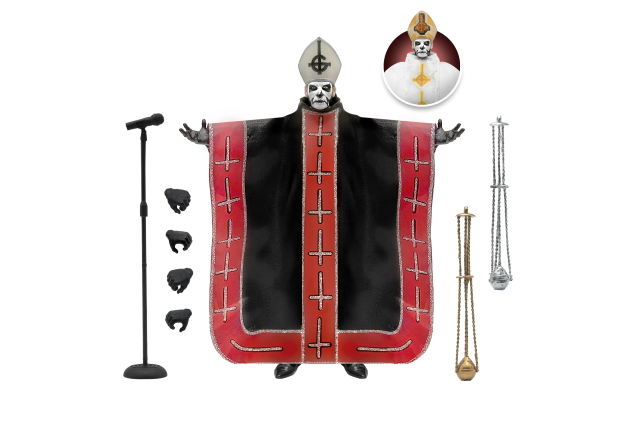 To commemorate the 10th anniversary of the debut album of rock’s most mysterious band GHOST, Super7 will release a Papa Emeritus I figure as part of the Ultimates! Figures Collection.

Papa Emeritus I was the progenitor of the heavy rock phenomenon GHOST. From the shadows, he and his Nameless Ghouls filled the airwaves with sounds of dark rituals, human sacrifices, and satanic hymns. Known for his mysterious nature and aggressive stage presence, Papa Emeritus I elevated GHOST to heights few in the clergy ever come to achieve. During his tenure as Papa, he toured the U.S. and Europe several times, all while staying true to the message of the Dark Ministry. While Papa Emeritus I‘s achievements in the name of Satan were numerous, the clergy had even greater plans of world domination…

This made-to-order deluxe 7″ highly articulated figure features Papa Emeritus I from the “Opus Eponymous” album era. The figure is lavishly detailed and painted and features an epic assortment of interchangeable accessories:

* 2 Thuribles with real chains (silver and gold) Microphone with stand

Papa Emeritus I will also come packaged in a deluxe slipcase-style box.

The GHOST Ultimates! Figure – Papa Emeritus I is a made-to-order release and is expected to ship in the winter 2021.

Super7 is the premier pop-culture design house and producer of lifestyle-oriented collectibles, toys and apparel based in San Francisco. Led by designer Brian Flynn, Super7 has harnessed the graphics, aesthetics and energy of his youthful obsession with science fiction, giant monsters, comic books, punk rock, skateboarding, robots and rebellion to build a unique and innovative business that crosses all categories and is not bound by traditional manufacturing boundaries. Besides its own branded products, Super7 has also designed, manufactured, and distributed officially licensed programs for “Star Wars”, “Masters Of The Universe”, the original “Alien” and “Planet Of The Apes” movies, as well as for music legends IRON MAIDEN, MISFITS and Lemmy.

Super7 actually started as a side project for Flynn, who also founded Hybrid-Design in 2001.