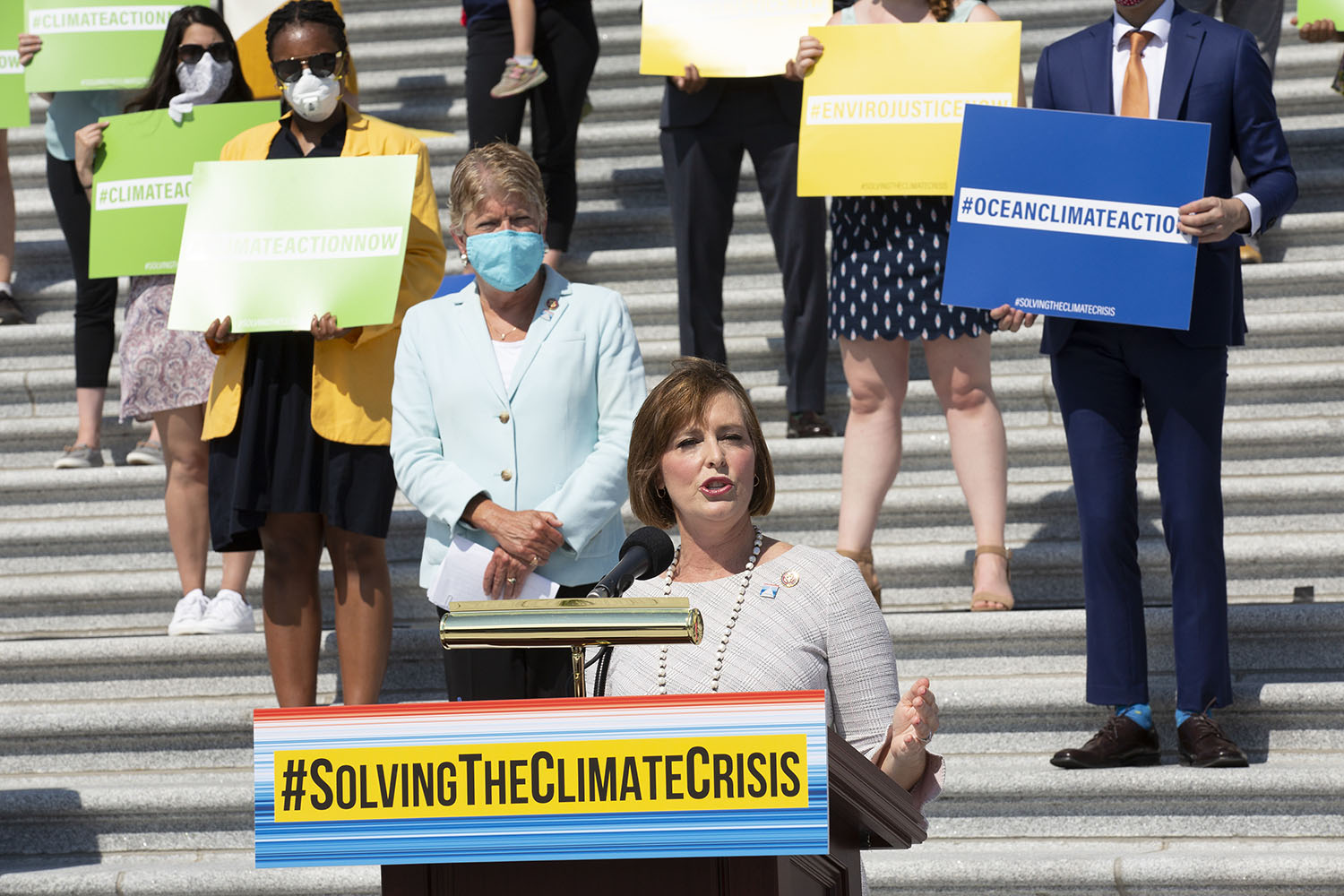 “It will be a fight as long as it needs to be,” Speaker Nancy Pelosi said Tuesday. “We will turn this report into law, saving the planet. Democrats know that the climate crisis is the essential crisis of our time.”

The document produced by the House’s Select Committee on the Climate Crisis contains no input from Republicans, who have consistently derided any climate change policies such as the Green New Deal, a reference to the plan led last year by progressives Rep. Alexandria Ocasio-Cortez (D-N.Y.) and Sen. Ed Markey (D-Mass.) that called for overhauling the U.S. economy to combat climate change.

Trump has seized on that program, and has even sought to characterize a new infrastructure package, on the House floor this week as being “full of wasteful ‘Green New Deal‘ initiatives.” He is expected to continue to hammer on the issue that he has dismissed as as “baby talk” that “would kill our country” despite polling showing voters want aggressive action on climate change and greater deployment of clean energy.

“Vice President Biden applauds Speaker Pelosi, Congresswoman Castor, and House Democrats for continuing to make tackling climate change a top priority for our country,” a spokesperson for the Biden campaign said. “As president, he will work with Congress to implement a bold agenda that addresses the climate emergency, achieves environmental justice, and creates good-paying jobs that provide a chance to join a union.”

The plan also won praise from the Sunrise Movement, a climate-focused youth activist group that helped lead the push for the Green New Deal, though Lauren Maunus, the group’s legislative manager, said it could have been stronger.

“That’s a real sign that young people are changing politics in this country and the establishment is scrambling to catch up,” Maunus said in a statement. “This plan is more ambitious than anything we have seen from Democratic leadership so far, but it still needs to go further to match the full scale of the crisis.”

At an event to unveil the plan, Democrats touted an analysis conducted by independent energy consultant Energy Innovation that predicted if enacted, its measures would prevent 62,000 premature deaths annually by 2050 while offering almost $8 trillion in cumulative health and climate benefits.

“We are releasing a transformative road map for solving the climate crisis,” said Rep. Kathy Castor (D-Fla.), chair of the committee. “We have a plan for building the 100 percent clean energy economy. And we are going to do it in an equitable and inclusive way.”

Republicans on the Climate Crisis Committee, led by ranking member Rep. Garret Graves (La.), released a statement saying they were “disappointed” Democrats did not let them help design the plan, but said they would seek to help craft measures as Congress considers further relief from the Covid-19 pandemic.

“Bipartisan recommendations to increase the resilience of our communities and address global emissions — while strengthening the American economy and getting families back to work — are worth pursuing,” the GOP lawmakers said in their joint statement. “We expect this effort to continue in the committee.”

The new document offers policy recommendations in nearly every sector of the economy. It calls for Congress to set a Clean Energy Standard to hit net-zero emissions in the electricity sector within two decades and while also mandating all cars be zero-emission by 2035 and heavy-duty trucks be 100 percent zero-emission by 2040.

It envisions slashing methane emissions from pipelines 90 percent by 2030 compared to 2012 levels, doubling funding for public transportation, and making massive investments in energy efficiency programs. The road map calls for an economy-wide price on carbon as “only one tool to complement a suite of policies to achieve deep pollution reductions and strengthen community resilience to climate impacts,” noting quickly pricing carbon is not a “silver bullet.”

Echoing legislation, from House Natural Resources Chair Raúl Grijalva (D-Ariz.), the road map calls for a reaching net-zero emissions from the nation’s public lands and waters by 2040, including a one-year moratorium on new oil, gas and coal leases on public lands that would be accompanied with “robust” funds to help transition fossil fuel communities toward other economic opportunities. It also envisions a ban on all new offshore drilling “in any region of the Outer Continental Shelf.”

“Addressing climate change can’t be done with just one bill because the problem is caused by so many connected policy failures,” Grijalva said in a statement. “The public rightly demands that Congress stop paying lip service to climate policy and start saving lives by making fundamental reforms.”

Environmental justice provisions are central to its lengthy list of recommendations, including a major bill from Grijalva and Rep. Donald McEachin (D-Va.). The road map notes the murder of George Floyd on its first page and calls the protests in response “reminders of the consequences of past inaction.”

“Building a resilient, clean economy affords us another opportunity: to acknowledge and commit to correcting past policy failures that created the climate crisis and the systemic economic and racial inequalities that plague our communities today,” it concludes.

The report marks the capstone to the 18-month tenure of the Select Committee on the Climate Crisis, which Democrats resurrected after taking the House in 2018. But it’s unclear how it will inform a sprawling and at times conflicting push from House Democrats on climate change.

The Energy and Commerce Committee in January released draft legislation calling for reaching net-zero greenhouse gas emissions in the building, industrial, transportation and electricity sectors by 2050. Many of those proposals are also included in the massive infrastructure and recovery package under consideration by the House this week.

A spokesperson for Pelosi told POLITICO this week’s consideration of H.R. 2 represents the vote on climate change legislation she promised would take place this Congress, noting many Republicans cite its environment and energy provisions in opposing it.

Major environmental groups and Evergreen Action, a collection of former staffers on Washington Gov. Jay Inslee’s presidential campaign, hailed the document as an indication of how seriously Democrats treat the problem and urged former Vice President Joe Biden to prioritize it, if elected.

“The House Select Committee’s plan represents a major shift in Congressional leaders’ approach to climate policy, towards a more urgent plan built on clean energy standards, investment and environmental justice,” Evergreen Action said in a statement. “The House Select Committee plan provides a proven formula for Congress to lead on climate policy that matches the scale and urgency of the crisis.”