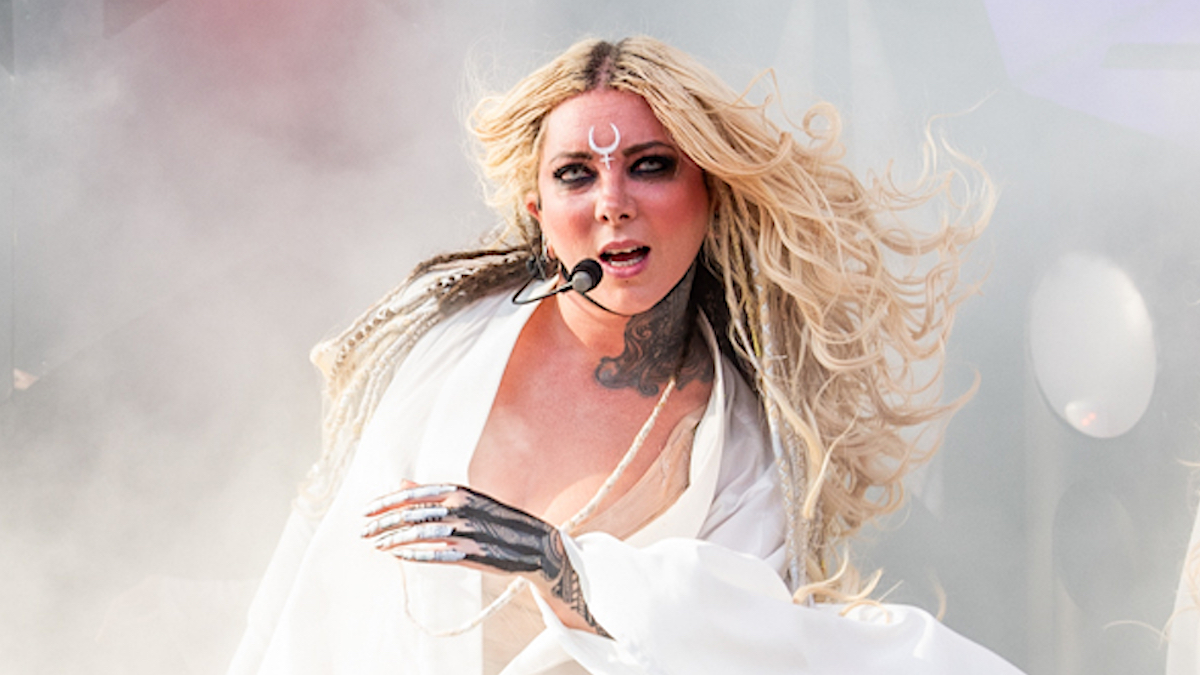 Beyond the Boys’ Club is a monthly column from journalist and radio host Anne Erickson, focusing on women in the heavy music genres, as they offer their perspectives on the music industry and discuss their personal experiences. This month’s piece features an interview with Maria Brink of In This Moment.

In This Moment reinvent themselves from album to album, so it’s no surprise that the band’s latest record, Mother, has a fresh style and feel. Their previous LP, 2017’s Ritual, was a concept album of sorts, centering around the Salem Witch Trials. Mother is a deeply personal and serious album lyrically, with solid rock riffing, experimental electronics, and singer Maria Brink’s soulful vocals.

Mother was released in the midst of the COVID-19 pandemic, with the band choosing not to postpone the album. In This Moment were also set to promote the new studio effort with a headlining spring outing, but like all other tours, it’s been put on hold.

While isolating at home, Maria Brink spoke with Heavy Consequence for the latest “Beyond the Boys’ Club” column. She discussed the new album, how the pandemic is affecting musicians, what advice she offers young women looking to get into the music world, and more. Read the full interview below.

On how Mother stands apart from previous In This Moment albums

It’s a great escape with everything going on right now, and we’re always trying to experiment. We’re definitely an experimental band, and this album has a more mature sound to it. It’s a more empowering, serious tone. Sometimes in the past, I’ve been campy and have fun with certain plays on things, but this one had a more serious, empowering energy to it.

On why Mother carries a serious tone

I think everything I was going through in life and where I am in my life brought the serious tone. I’ve been experiencing some real things and loss and some sad things and some new life, That’s where I was with everything. I was in a serious place. It’s always based on your personal experiences.

On why In This Moment favor dramatic, theatrical shows

There’s something really cool about bringing performing arts and a different visual that you don’t always see in the active rock and metal world. You see it sometimes, like with Alice Cooper, you see theatrics, but I wanted to bring some performing arts where the visuals you’re seeing can evoke emotions, as well as the music. So, even if you were to pause the music but watch the show, what you’re visually looking at is still inspiring and evoking those things, and then when you combine them both, you get double that impact.

I know Lzzy, and she’s so amazing. I’ve gotten to tour with her a lot. I was acquaintances with Taylor and got to know her and am now her friend. They’re both such powerful symbols for empowering women in this scene. They’re both such queens but really diverse and different from each other, and they both are the strong faces of the community right now. I thought it would be cool for us three to join forces and show people that we were working together, as an empowerment thing. Sometimes you have to join superpowers! (Laughs) It was an honor to work with them. They’re both so talented and amazing, and that’s the only way we could even cover that Queen song. I love Freddie Mercury and Queen. I grew up on them, because my mom loved them so much. I think it was the perfect song with those women coming together. I wouldn’t cover that song myself.

On how the COVID-19 pandemic is impacting the music industry

It’s crazy. We’re all living in a movie right now. History is being made, and we’re all just watching it every day and seeing it on television. I live on the outskirts of New York, so we’re definitely in the thick of it, and it’s tragic and heartbreaking beyond words, seeing the sacrifices that people like the doctors and nurses and workers are making, I’m moved to tears almost every day. People are suffering. The whole world is impacted by it, but definitely the bigger crowd industries — sports, musicians, concerts, all performing arts — they’re gong to be impacted really hard because of the mass gatherings. But, I think we’re going to get through it. I think they just have to come up with, even before the vaccination, something that can treat it. As soon as they can come up with something for treatment for this, we can all start going back to normal. Meanwhile, we have to be patient and pray for people and try to not go crazy in our houses!

Everything at this point is so uncertain for anybody. When we’re told that we’re allowed to tour and it’s safe and we’re not putting anyone at risk, I’m praying that all the dates line up, and we can tour and see everybody can be safe together. So, I’m praying that happens. In the meantime, people are coming up with innovative ways to stay connected with fans. I’m trying to brainstorm some things, because I’m a really private person, and I don’t do a lot of press. I don’t really do live Instagram stuff or things like that, but I might have to push myself out of it to not be so hidden and to make sure I’m connecting with everyone. Because, everyone needs to connect through this time.

Our crew is our family, and we just released a shirt where all proceeds go to them, and we ‘re trying to do other things. People are going to have to start being innovative, and I don’t know what it’s going to look like, but we’re probably going to start seeing strange things we’ve never seen before and have a lot of new realities for how people approach music and connect with fans out there. I’m trying to brainstorm ideas, too. It’s insane. It’s history in the making.

A lot of that had to do with the fact my mom was a rocker and flower child and had me at 16, so she took me to all the lawn concerts. We’d not actually be at the concerts, but we’d be outside and listen in our cars. So, I grew up on Stevie Nicks and Tina Turner and Joan Jett and Janis Joplin. My mom loved all that, and we went to the concerts, so I really think that was my first inspiring thing that really moved me. Me, as a young girl, being subjected to all that through my mom was my biggest inspiration.

It’s becoming not abnormal. It’s more empowering. Women are also not afraid to be feminine. When I first started out, including myself, it was much more hard-edged in the metal community with women. It was hard and not soft. I would still wear these Alice in Wonderland dresses and had my little feminine ways, but a lot of of the women around me were more hard. But, now you’re seeing women in the metal world being not afraid to be a women and being soft and powerful and strong and heavy. They can all co-exist.

For the most part, it’s been amazing. It’s been a powerful and moving experience. I went from a girl to a woman in this scene, so I got to learn so much within myself. Of course, there have been some difficult things as a woman, especially early on, but I think things like that are powerful things that happened to me that I don’t regret, because they taught me how to be strong and deal with situations and have control over a crowd. It gave me grit. I have no regrets. No matter who you are, the music scene is a hard scene to break. I think everything has its pros and cons, and when you put your mind to it, no matter who you are or where you come from, you succeed at it. Don’t let things hold you back.

Do what you love, especially if you’re passionate about it. If something moves you and you have a dream, do it. Don’t let anybody get in your way or tell you what you can’t be. Become the impossible. Always push, believe in what you can do and don’t let anybody second guess you. Work on your craft. What is it about you that stands out? If I were to line you up with 100 bands, what makes you stand out? We’re all rare and have that beautiful, rare thing, so find that and push that through to make you stick out.

Our thanks to Maria Brink for taking the time to speak with us. Pick up In This Moment’s new album, Mother, here, and support the band’s road crew with this special “Stay at Home” t-shirt.