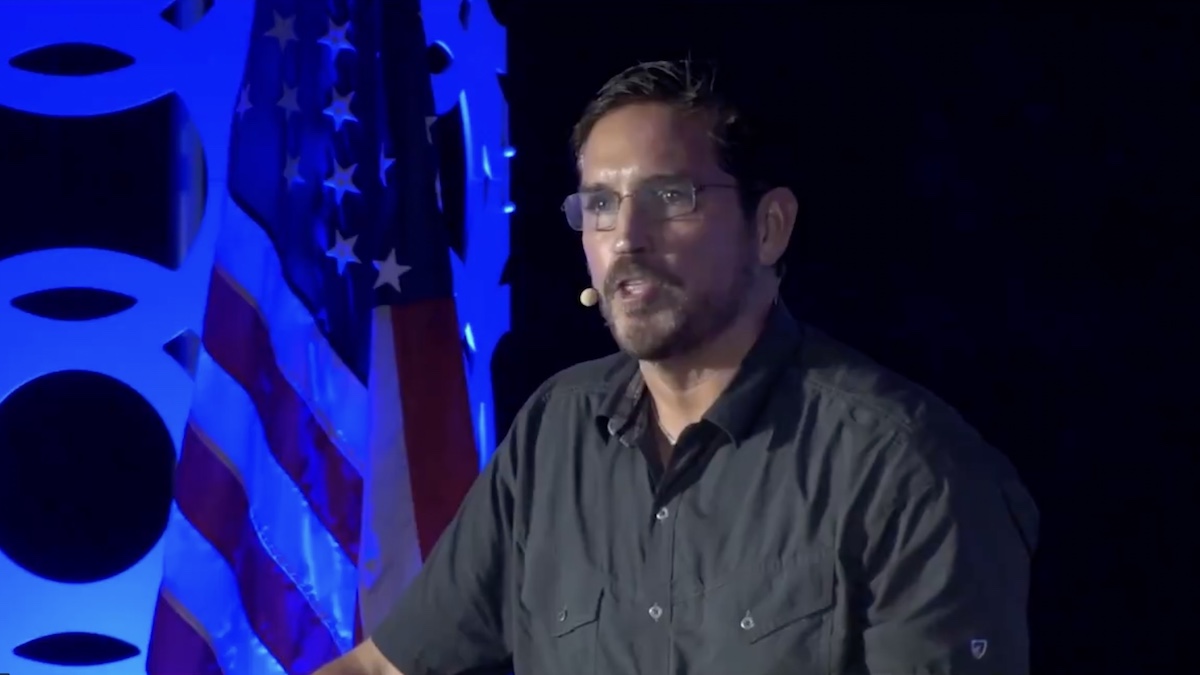 In a bizarre appearance at a QAnon conference, Passion of the Christ actor Jim Caviezel mixed religious bombast with quotes from the movie Braveheart as he called on the crowd to “[send] Lucifer… straight back to hell.”

The For God and Country Patriot Double Down event took place at the Ahern Hotel in Las Vegas from October 22nd to 25th. Via Mediaite, the conference was themed around “loss of liberties” and was scheduled to end with a mask burning.

The actor’s speech was split into roughly three parts: cool movie quotes, Biblical rage, and rightwing conspiratorial winking. “Will you fight?” Caviezel asked the crowd, as Mel Gibson had done in Braveheart. Without a Scottish soldier to say the next line, Caviezel was forced to play both parts himself, pointing off-stage and saying, “This man says, ‘No, we’ll run and we’ll live.’”

With his straw man in place, he continued, “Yep, fight and you may die. Run and you may live — for at least a while. And dying in your beds many years from now, would you have been willing to trade all the years from this day to that for one chance — just one chance — to come back here and tell our enemies: That you can take our lives, but you can never take our freedoms!”

Next, the 53-year-old thespian departed from that script. “We must fight for that authentic freedom and live, my friends. By God, we must live, and with the Holy Spirit as your shield and Christ as your sword may you join Saint Michael and all the angels in defending God and sending Lucifer and his henchmen straight right back to hell where they belong!”

Caviezel did not name Lucifer’s henchman, but the crowd would have had no doubt of whom he spoke when he followed that with a reference to “the Storm,” QAnon’s name for the day when thousands of Democrats and Hollywood elites will be rounded up and arrested for their role in a (non-existent) child sex-trafficking cabal.

“We are headed into the storm of all storms,” Caviezel continued. “Yes, the Storm is upon us. But not without Jesus, our rudder.” He ended with a quote from the most revered of the Republican saints: “And in the words of Reagan: evil is powerless if the good are unafraid. God bless you.” Watch the whole speech after the jump.

The appearance came as Caviezel gears up for his upcoming biopic movie, Sound of Freedom. He stars as Tim Ballard, a scammer and proponent of the “adrenochroming” conspiracy that suggests liberals are harvesting children’s blood. In a viral appearance at a QAnon conference in April, Caviezel took a dive off the deep end into adrenochroming, and you can check it out below.

Jim Caviezel gives a speech riddled with religious fanaticism and Q propaganda at the QAnon conference in Las Vegas. pic.twitter.com/9gugWfoyaG