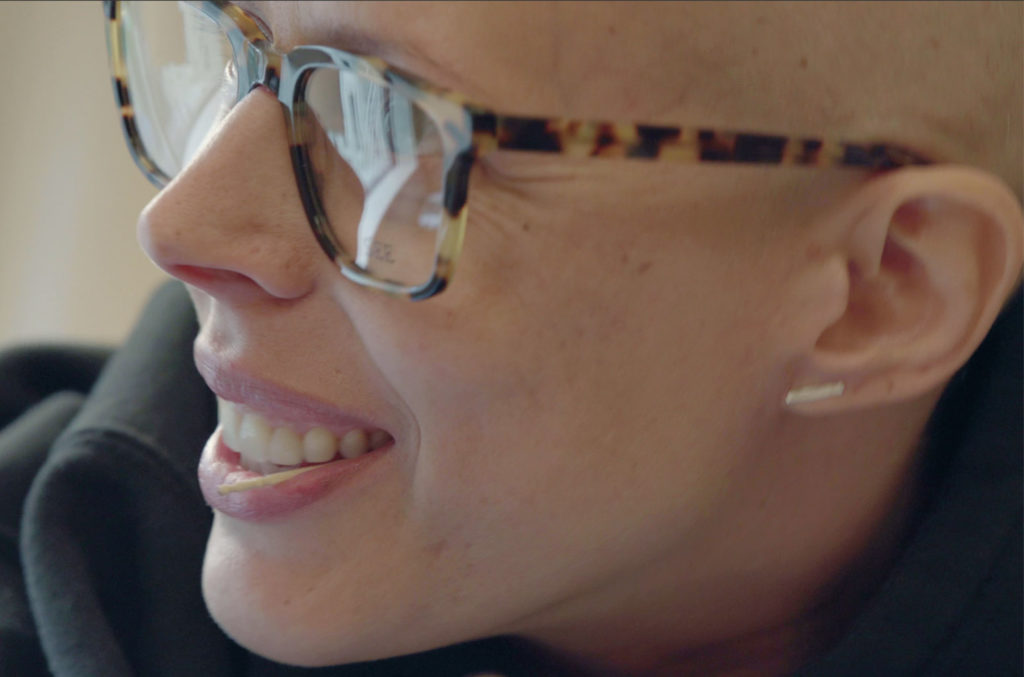 It was December 2018, and music executive/podcast host Karlie Hustle was about to fulfill her longtime dream of directing a documentary. But on Christmas Eve, she received a diagnosis that changed the trajectory of her life.

“Right as we were getting ready to book flights and get everything together for a shoot in April of 2019, I was diagnosed with [breast] cancer,” Hustle tells Billboard.

At a point when many would have bowed out of the project altogether, Hustle and her producer Dan Eason instead made the decision to lean into her diagnosis. Originally intended as a feature-length documentary that would focus on Hustle, a self-described “city slicker,” “getting back in touch with nature” in the Oregon wilderness, the focus pivoted to become a story about her journey through the rigors of cancer treatment, which included seven rounds of chemotherapy, 17 infusions and multiple surgeries, including a double mastectomy and breast implants to replace the lost tissue. It is now the flagship installment in High Touch, a planned series of short documentaries that will kick off with Hustle’s 30-40 minute film. Now in post-production, Eason and Hustle will soon shop the film to distributors with the help of Stacey Abrams, owner of the strategic advisory service Film Specific.

Documentary filmmaker is just the latest hat that Hustle has worn over the course of a 20-year career, which has included stints as a street team representative for record labels and radio stations, an on-air radio personality/radio executive at stations across the West Coast, an assistant program director and music director at Hot 97 in New York City and, now an executive working in artist relations at Apple Music and host of the podcast Brutally Honest. Along the way, she’s devoted ample time to charitable endeavors, including work with homeless and foster care children; started her own line of bow ties; and gave birth to a now-four-year-old daughter.

After living life at full tilt for so many years, Hustle, now 43, is in the process of reorienting her priorities. The change started even before her cancer diagnosis, when a convergence of events — including the birth of her daughter, her 40th birthday and a diagnosis of Chronic Epstein-Barr Virus — precipitated a self-described “midlife crisis” that caused her to reflect on her place in the world. It was then that Hustle started the Brutally Honest podcast, on which she talks frankly about issues of identity as a 40-something mother working in a youth-obsessed industry that tends not to foster a healthy work-life balance.

Hustle developed what she calls a “modest” following with Brutally Honest, which now sits behind a paywall on her Patreon page to help pay her medical debts. Eason, who was introduced to the podcast by his wife Amanda Yoshida, reached out after listening to an episode in which Hustle declared her filmmaking aspirations.

“He reached out to me and said, ‘Hey, I’m a filmmaker. Do you want to make a film?’ I was like, ‘What? Of course I do!’” Hustle recalls. “It was kind of like The Secret, like the law of attraction. It feels corny to say that, but if you if you speak it out loud, it might fall on the right ears.”

Hustle says that while she was initially hesitant to share the news of her cancer diagnosis with her online following, she quickly relented. “It just didn’t make any sense to me to not do that, because I have a podcast called Brutally Honest,” she says. And then it came time to make the film — an experience Hustle was surprised to find meshed well with her personality.

“The crazy thing I realized in directing the film was that I have all the qualities, apparently, of a director already. You know, neurotic, sensitive, emotional,” she laughs.

“She has a natural ability to piece together bold, cohesive, and concise narratives out of abstract and macroscopic ideas,” says Eason by email. “We both talk the creative direction into these granular details. As one of us dives deep into the rabbit hole, the other one listens intensively and patiently. Karlie really knows how to connect the dots for the storyline in those moments.”

The bulk of the documentary — which began shooting in the spring of 2019 and took around a year to finish — was shot pre-pandemic, though some of the footage was filmed afterward. “It’s definitely strange [having been] in cancer treatment quarantine last year, and then being back in quarantine this year for a different reason,” says Hustle. “But, you know, I definitely feel like I learned a lot of lessons last year that have gotten me through this year in a different way.”

Chief among those lessons was Hustle’s realization, when faced with her own mortality, that a lot of what she prioritized earlier in her life and career ultimately wasn’t that important.

“I think I was putting a lot of anxiety on myself for things that just didn’t really matter,” she says. “You know, if my family is good and my friends are good and my community is good and I feel like I’m doing all that I can do to not add harm to anyone or anything intentionally, that’s kind of my goal. And if I can do those small things every day, then I feel like I’m living my life properly.”

Thankfully, Hustle’s prognosis is good: in January, her cancer went into remission. Now, she and Eason are talking about doing another documentary together (“Ideally I’m not in this one and I don’t have cancer,” she laughs). But even now that she has a clean bill of health, she’s not taking anything for granted.

“Everything is just significantly more urgent in my life…facing your mortality will change you in immeasurable ways,” she says. “And everybody is gonna choose their own adventure. Not everybody’s gonna see it this way or feel this way. But this is how I feel and, you know, we have an opportunity to kind of do that every day without nearly dying, hopefully. But sometimes that’s what it takes.”