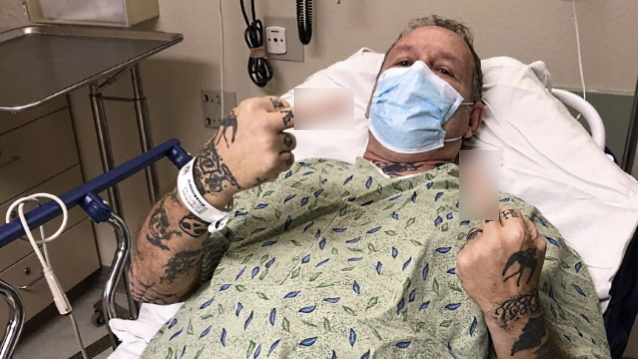 AGNOSTIC FRONT vocalist Roger Miret says that fans’ support is helping him get through his battle with cancer.

Earlier today (Thursday, October 14), AGNOSTIC FRONT‘s official Instagram shared a photo of Miret in a hospital bed, and included the following message from the singer: “After another short trip to the ER I just wanted to say that all your love and support is getting me through this. I got this and I’ll see you in the pit very soon!!!”

Earlier this year, Miret was diagnosed with cancer. A long road of tests and diagnoses led to a complex initial surgery and lengthy hospital stay. Even though the original surgery was complicated, the results were extremely positive. The cancer was successfully removed and Roger is now in complete remission and all signs of cancer have disappeared.

In early October, Roger said that he underwent another surgery after “running a fever for two weeks straight” and developing “an infection.”

A GoFundMe page has been launched where fans can donate to help Roger pay medical care costs.

Born in Cuba, Miret fled with his family to the U.S. to escape the Castro regime. He joined AGNOSTIC FRONT in 1983, and the seminal New York harcore group released classics like “United Blood”, “Victim In Pain” and “Cause For Alarm” over the next several years.

In 2017, Miret released a memoir, “My Riot: Agnostic Front, Grit, Guts, And Glory”, which documented his struggles to adapt to life in the U.S. after his family fled the Castro regime. According to the Phoenix New Times, the book delved into many facets of Miret‘s life: the grinding poverty of his childhood; living as a teenager squatter; becoming deeply enmeshed in downtown New York’s hardcore scene; and later turning to drug-running to support his family.

In addition to fronting AGNOSTIC FRONT, Miret has also played with ROGER MIRET AND THE DISASTERS and is a member of THE ALLIGATORS.

For the past several years, Roger has resided in Scottsdale, Arizona.

Here Are the Most & Least Crowded Categories for the 2022 Grammys

Here Are the Most & Least Crowded Categories for the 2022 Grammys