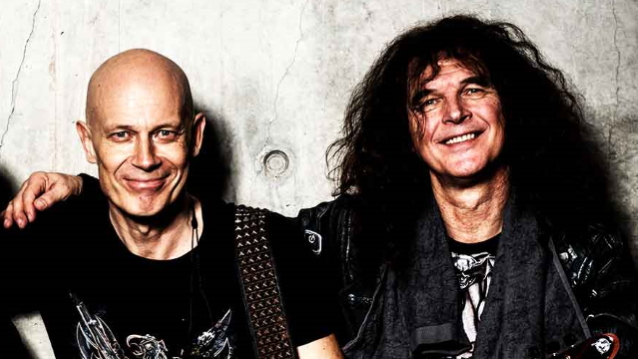 ACCEPT guitarist Wolf Hoffmann spoke to Alison Booth of Metal Shock Finland and TotalRock Radio about how the band’s recent lineup changes affected the sound of its upcoming studio album, “Too Mean To Die”, which will be released on January 15, 2021 via Nuclear Blast. The LP will be the group’s first without bassist Peter Baltes, who exited the group in November 2018. He has since been replaced by Martin Motnik. ACCEPT‘s lineup has also been expanded with the addition of a third guitarist, Philip Shouse, who originally filled in for Uwe Lulis during last year’s “Symphonic Terror” tour, before being asked to join the band permanently.

“Yeah it’s crazy — we lost one guy, but gained two new guys,” Wolf said. “Two for one. [Laughs] With Peter, it’s just sad. It just killed me at the time, but I’m sort of over it now, because after all these 40 years, it was a sad departure. But I have to respect it. People move on, and he made the decision he no longer wanted to be in the band, and what can I do? I just move on and move forward.

“I wouldn’t say Martin stepped right in his footsteps — that would be ridiculous, because hey, I played with Peter for 40 years — but I’ve gotta say Martin really is doing his best and he’s doing a tremendous job filling in,” Wolf continued. “He’s great. And he even contributed a lot to the songwriting, which completely took me by surprise. He wrote some great songs for this album, and that was a blessing — it was awesome. ‘Cause I really didn’t want the album to be just mine, mine, mine — I didn’t want it to be like a solo album, so I welcomed input from everybody. And Martin was the guy who stepped forward and really delivered some cool stuff.”

As for Shouse, Wolf said: “We discovered what a great player and nice guy and easy going and perfect fit for the band Phil is. When we toured with him on this orchestra tour, ‘Symphonic Terror’ tour, we found out what a great guy he is, and we basically didn’t wanna let him go after this tour — it’s as simple as that. And we decided, why not have three guitar players? We did some shows together, and it worked brilliantly. I’ve gotta say I was not a hundred percent sure it would be as good as it is, but I was actually pleasantly surprised how well it sounds and how well it looks and how well it works on stage. It’s a good camaraderie in the band. And, yeah, it’s just one more guy. He plays a lot of lead on the album too, so we deliberately made enough space for him to be on the album, and especially with that in mind for live shows, we gave him enough space to play leads and with trading licks and we do a lot of twin leads together. So there’s lots of room for Phil on this album.”

In November 2019, Hoffmann told Powermetal.cl that he no longer kept in touch with Baltes after the bassist exited the group a year earlier. “Unfortunately, when somebody leaves the band, they’re always kind of out of sight, out of mind,” Wolf explained. “It’s very sad. I wish it wasn’t that way, because we’ve been friends for so long. But the reality is I haven’t really heard from him — even though I reached out a couple of times. He’s almost like he wants to disappear or he wants to leave the music business altogether. It’s sad and I still don’t quite understand what really happened. But it is what it is, and we move on.”

“Too Mean To Die” was recorded in Nashville, Tennessee with British producer Andy Sneap (JUDAS PRIEST, MEGADETH), who has been responsible for the magnificent studio sound of ACCEPT since 2010.